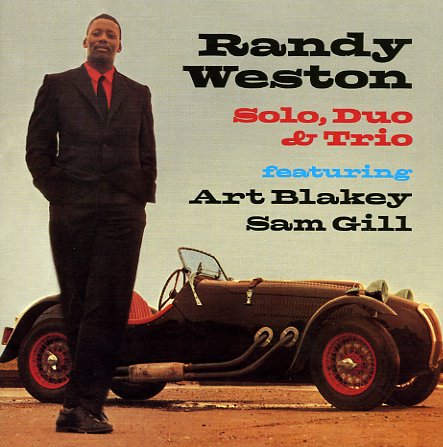 Two of Randy's Weston's earliest albums – both recorded in the mid 50s, and briefly (and rarely) issued on the Riverside label. The album's feature Weston playing in a very spare setting – as only 5 of the tracks feature a trio (with Art Blakey on drums and Sam Gill on bass), and another 8 feature Weston and Gill musing intimately on some Cole Porter compositions. The remaining 5 tracks feature Weston solo, on standards and original tunes – and the titles on the set include "Zulu", "Pam's Waltz", "Solemn Meditation", "Again", "Lover", "I Love You", "Night & Day", "Get Out Of Town", and "Softness".  © 1996-2022, Dusty Groove, Inc.
(Out of print and still sealed.)

Randy Weston – Mosaic Select (Piano A La Mode/Little Miles/Live At The Five Spot/Unissued Session/Uhuru Afrika/Highlife)
Mosaic/United Artists/Roulette, Late 50s/Early 60s. Used 3 CDs
CD...$59.99
Some of the most important work ever recorded by Randy Weston – 5 early albums that really pushed the boundaries of modern jazz! First up on the set is Little Niles – a fantastic set that features some of Weston's best early compositions – angular and Monk-ish numbers, but with a ... CD

African Cookbook (Koch pressing)
Koch/Atlantic, Mid 60s/1972. Used
CD...$9.99
A killer album of African-tinged jazz – recorded privately by Randy Weston in the mid 60s, and not issued formally until 1972 by Atlantic Records! The session shows Weston at the height of his modernist experiments – and at a time when his work was going largely undocumented, probably ... CD

Portraits Of Thelonious Monk – Well You Needn't
Verve (France), 1990. Used
CD...$19.99
Wonderful late work from Randy Weston – featuring a group that includes Jamil Nasser on bass, Idris Muhammad on drums, and Eric Asante on percussion – with a sound that almost gets funky at times! CD

Khepera
Verve, 1998. Used
CD...$11.99
Some of the fiercest work recorded by Randy Weston in recent years – a set done with his "African Rhythms" group that includes percussionists Chief Bey and Neil Clarke, and which also features horn work by Benny Powell, Talib Kibwe, and Pharoah Sanders! The tracks are long, dark, ... CD

Saga
Universal (France), 1995. Used
CD...$9.99
Quite possibly our favorite of the wonderful 90s comeback sessions by Randy Weston – thanks in large part to the great players on the set! The album's a smaller group outing than some of Weston's others from the time – played by a septet that includes Billy Harper on tenor sax, Talib ... CD

Red Garland At the Prelude Vol 1/Live!
Prestige, 1959. Used
CD...$4.99
One of the harder to find Red Garland sessions on Prestige – two records' worth of material that was issued on 4 different albums! The set is noteworthy not only for an excellent stretched out trio performance by Garland – working here with Specs Wright on drums and Jimmy Rowser on ... CD