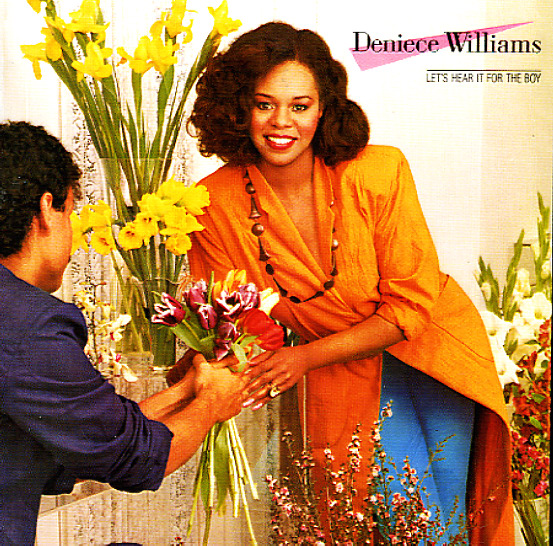 Let's Hear It For The Boy

An album that crossed over for Deniece in a big way – and it's a great one, with crisp, lean pop soul production that's as gratifying as any of the era – with a few ballads that are totally top notch, too! This is definitely the best of her more pop oriented records, with hooks galore – they sink in deeply! Includes the unstoppably catchy title track (but try to not think about Chris Penn dancing to it) plus "I Want You", "Picking Up The Pieces", "Next Love", "Black Butterfly", "Haunting Me", "Wrapped Up" and more.  © 1996-2022, Dusty Groove, Inc.
(Includes the lyric sleeve. Cover has light wear and a small mark from sticker removal.)

Raise!
Columbia, 1981. Near Mint- Gatefold
LP...$14.99
Earth Wind & Fire hits the 80s – and never misses a beat! Turns out that the group's older style of jazzy funk was a perfect fit for the boogie-styled rhythms of the post-disco era – heard here on the megahit "Let's Groove", and followed up by a beautiful batch of ... LP, Vinyl record album

Manhattans
Columbia, 1976. Very Good+
LP...$6.99
A Philly soul classic from The Manhattans – one of their best 70s albums, and a record that showed that they were firmly out of the indie ghetto, and totally on top of their game! The record features arrangements and production by Bobby Martin and Bert DeCoteaux – bubbling along in ... LP, Vinyl record album

Bustin Out Of L Seven
Gordy, 1979. Near Mint-
LP...$9.99
Think what you might about Rick James, this is actually a pretty darn funky album – with lots of tight bass-heavy grooves! Rick's working here with the Stone City Band, in a style that's leaner and less commercial than some of his later work – going for a mainstream funk approach, but ... LP, Vinyl record album

Nightclubbing
Island, 1981. Near Mint-
LP...$49.99
One of our favorite albums ever from Grace Jones – a record that has her shedding some of the disco excesses of earlier years, and moving into a great blend of sounds that really showcases the energy of the New York scene from which she sprang! The album was recorded in Nassau, with help ... LP, Vinyl record album