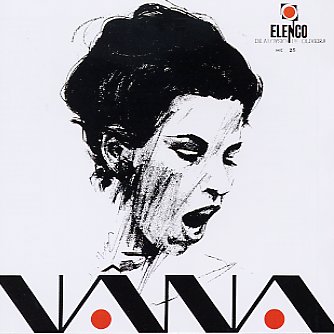 The first ever album by Nana Caymmi – the deep-voiced daughter of Dorival Caymmi, recorded here in some sublimely baroque arrangements by Oscar Castro Neves. The album's done in the wonderful style of the Elenco label – haunting, slightly echoey, and with a style that surpasses the sophistication of the bossa era with even grander musical aspirations. Neves keeps things simple and beautiful – never pushing Nana too much, and letting her vocal expressions open like a youthful budding flower. Titles include "Acalanto", "Nao Tem Solucao", "Nunca Mais", "Das Rosas", "Razao De Viver", and "Morrer De Amor".  © 1996-2022, Dusty Groove, Inc.
(Out of print.)