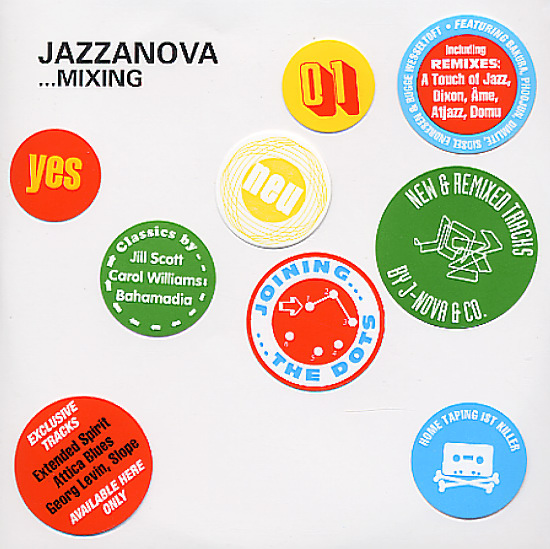 Jazzanova return to an earlier passion of theirs – the live DJ mix – and they serve up a whole blend of their favorite tunes, including some great bits exclusive to this set! The set's laid out in a real Gilles P sort of mode – very song-structured, with specific moods and paces that change as the set goes on – taking the listener on a groove-based trip through a variety of styles. Most of the tracks are of recent vintage, and a number are by Jazzanova themselves, or mixed specially for the set with a cool and laidback Sonar Kollektiv sort of vibe. Exclusive tracks include "Let Your Heart Be Free" by Jazzanova with Clara Hill & George Levin, "Uzoamaka (acapella)" by Oba Funke, "The Quest (Dixon's Not Released In 2001 mix)" by Attica Blues with Roger Robinson, "LOVE Beats" by Jazzanova, "Siding" by Extended Spirit, and "Mousse" by Slope. Other tracks include "Try" by Sidsel Endresen & Bugge Wesseltoft, "A Long Walk (touch of jazz mix)" by Jill Scott, "Sponsored By The Alphabet" by Dimlite, "You Know How We Do (ski rmx)" by Bhamadia, and "Thinking About (Domu mix)" by Bakura.  © 1996-2021, Dusty Groove, Inc.
(Out of print.)