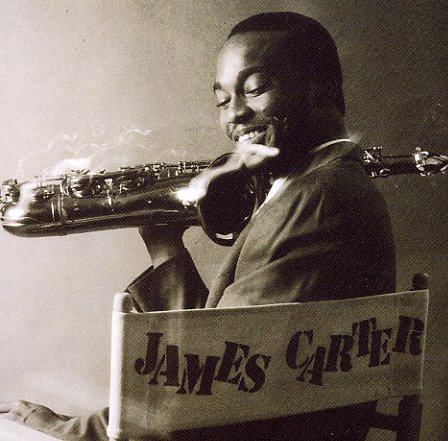 JC On The Set

James Carter's first album as a leader – and a set that helped mark a place for him as one of the strongest saxophone voices of the 90s! The album has Carter's work on alto, tenor, and baritone saxes set center stage – alongside backing by a trio that features pianist Craig Taborn, but which allows plenty of space for Carter to dominate the sound with his deeply soulful tone and often-pyrotechnic approach to his solos. There's some occasional moments that go a bit over the top, in a "hey look at me" sort of mode – but they're nicely offset by a deeper spirit that appreciates the traditions that inform Carter's sound, and which made the record a real standout in the early 90s. Titles include "Lunatic", "Hour Of Parting", "Caravan", "Blues For A Nomadic Princess", "Worried & Blue", and "Baby Girl Blues".  © 1996-2022, Dusty Groove, Inc.
(Out of print.)