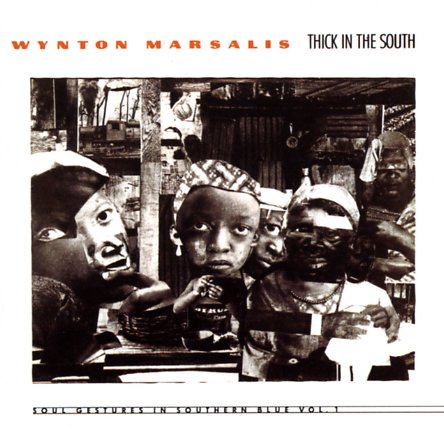 Thick In The South – Soul Gestures In Southern Blue Vol 1

The first in Wynton Marsalis' excellent Soul Gestures trilogy – a set that features some especially nice work from Joe Henderson on tenor sax! The set was recorded at a time when Henderson was really coming back into his own – and the long, extended tracks on the record really let Joe stretch out with the sort of freely expressive solos honed over previous decades of work! Henderson's presence brings a sharpness here that you might not expect – and a deeper sense of soul than some of Wynton's previous stiffer attempts at modernism. Other players include Marcus Roberts on piano – another great presence on the date – Bob Hurst on bass, and Jeff Watts and Elvin Jones on drums. Titles include "LC On The Cut", "Thick In The South", "Elveen", "Harriet Tubman", and "So This Is Jazz Huh".  © 1996-2021, Dusty Groove, Inc.
(Out of print.)