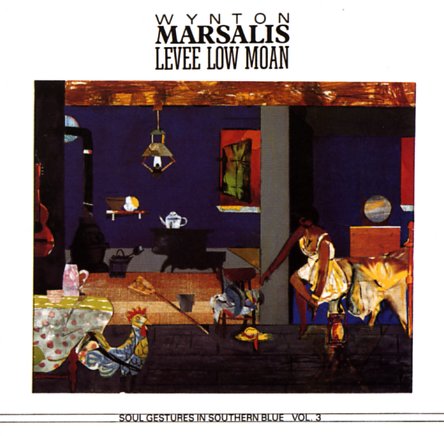 The last chapter in Wynton Marsalis' Soul Gestures trilogy of the early 90s – and like the others, it's a set with its own sort of sound and feeling – another illustration of the many talents of Marsalis at the time! Despite the "levee" reference in the title, the work's hardly the down-home effort you might expect – and instead, the tracks are long, freewheeling numbers played with a bit more soul than some of Wynton's earlier work, yet still a relatively modern sensibility overall. Nobody lets their hair down too much here, but the album's also nicely free of the sort of cliches you might expect from the project – none of the fake Crescent City modes that might hurt the date. Players include Marcus Roberts on piano, Wes Anderson on alto, Todd Williams on tenor and soprano, Reginald Veal on bas, and Herlin Riley on drums. Titles include "Jig's Jig", "Levee Low Moan", "In The House Of Williams", and "Superb Starling".  © 1996-2021, Dusty Groove, Inc.
(Out of print.)

Live At The House Of Tribes
Blue Note, 2005. Used
CD...$3.99
With Wessell Anderson on alto, Eric Lewis on piano, Kengo Nakamura on bass and Joe Farnsworth on drums – plus geuest percussion from Robert Rucker and Orlando Q Rodriguez. CD

Citi Movement
Columbia, 1993. Used 2 CDs
CD...$3.99
A nice little take on the "city symphony" mode that was big in American music a few decades back – served up by the Wynton Marsalis Septet of the early 90s, with decidedly modern touches! The double-length album's a three-tiered affair – with part one standing out as Wynton's ... CD