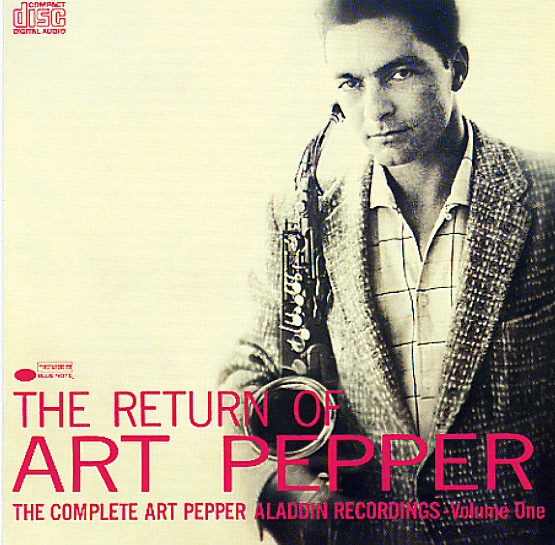 Given that Pepper was on and off the LA scene a fair bit in the 50s – due to personal trouble and legal battles – this album's not so much "the return", as it is one of Pepper's many strong steps back into the studio, a place in which he demonstrated an uncanny ability to craft brilliant work, despite the turmoil going on around him. The set's as classic as you can get for Pepper – right down to the classic William Claxton photo on the cover (which has a chilling story that you'll find in Art's autobiography). Players include Jack Sheldon, Russ Freeman, Leroy Vinnegar, and Shelly Manne – and titles include "Pepper Returns", "Funny Blues", "Angel Wings", "Walkin Out Blues", "Five More", "Minority", and "Mambo De La Pinta".  © 1996-2022, Dusty Groove, Inc.

Trip
Contemporary/OJC, 1976. Used
CD...$9.99
The "trip" here is a mellow one – not the soaring, spacey style you might expect in a long line of drug-reference titles for Art Pepper albums – but that difference is a-ok with us, because Art's really hitting some great new territory here, thanks to a hip trio that includes ... CD

Hustlin' (RVG remaster edition)
Blue Note, 1964. Used
CD...$8.99
One of Stanley Turrentine's few organ-based sessions for Blue Note – recorded in the company of his wife Shirley Scott, a real cooker on the Hammond who holds it down masterfully here – and great band that's filled out by Kenny Burrell on guitar, Bob Cranshaw on bass and Otis Finch on ... CD