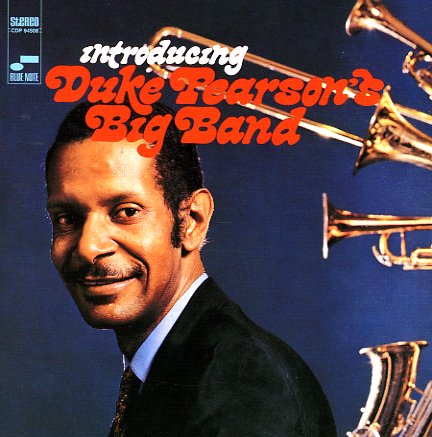 Also available
Duke Pearson — Introducing Duke Pearson's Big Band ... LP 9.99
A much better record than you'd expect – one of Duke's funkiest sessions, and a hard swinging big band set with a great late 60s feel! The group is all-class all the way – with players that include Pearson, Bob Cranshaw, Mickey Roker, Marvin Stamm, Julian Priester, Frank Foster, and Jerry Dodgion – and the tracks are short, but with an expansive groove that takes this one way past regular big band jazz, and into the mode of some of the hipper European groups at the time. Includes the classic track "Groundhog", which has a nice funky break on it – plus the cuts "New Girl", "Bedouin", "New Time Shuffle", and "Mississippi Dip". Plus, this CD also features 6 bonus tracks lifted from the album Now Hear This – an equally great album in a similar mode, with titles that include "Make It Good", "Minor League", "Disapporachment", "Tones For Joan's Bones", and "The Days Of Wine & Roses".  © 1996-2023, Dusty Groove, Inc.