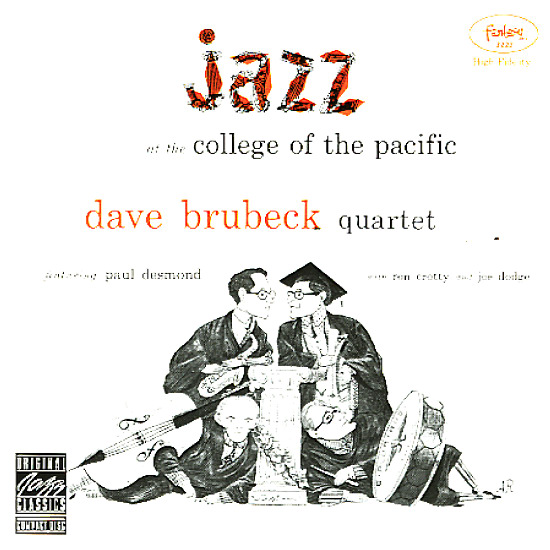 Jazz At The College Of The Pacific

Classic early live material from the Dave Brubeck Quartet – already humming along nicely with some great alto sax from Paul Desmond! The group's in fine form here – a bit more relaxed and open than on their Columbia recordings – with plenty of creative piano lines from Dave, showing just a slight dose of modernism, and lots more of that cool, icy alto sax work that made Desmond a standout right from the start. Rhythm is by Ron Crotty on bass and Joe Dodge on drums – and titles include "Laura", "Lullaby In Rhythm", "For All We Know", "All The Things You Are", and "I'll Never Smile Again".  © 1996-2022, Dusty Groove, Inc.
(BMG music club pressing.)

Time Out
Columbia, 1959. Used
CD...$2.99 (LP...$29.99)
Easily the crowning moment of genius for the legendary Dave Brubeck Quartet – the moment when all things came together magically, and the group somehow elevated themselves to a whole new level in jazz! At the time of the set, Brubeck, Paul Desmond, and the rest had already been making plenty ... CD

Bossa Nova USA
Columbia (Japan), 1962. Used
CD...$19.99
Way more than just a gimmicky bossa nova session – and a surprisingly great showcase for the inventive rhythms of the Brubeck group, and the sensitive alto work of Paul Desmond! The record's got a really different feel than some of Dave's other work for Columbia – in that the modernism ... CD

In Their Own Sweet Way
Telarc, 1994/1995. Used
CD...$4.99
Dave Brubeck on piano, Matthew Brubeck on cello, Chris Brubeck on bass and trombone, and Dan Brubeck on drums. CD