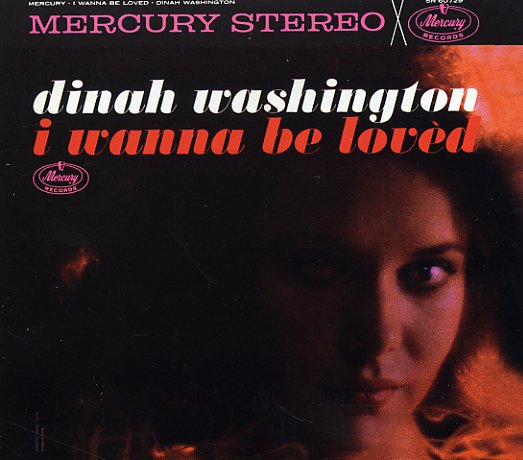 I Wanna Be Loved

A key set in the early 60s recasting of Dinah Washington's sound for a younger generation – and a record that pairs Dinah's great vocals with some lively arrangements from Quincy Jones! The Q really knows how to hip things up for the record – taking the familiar tunes of the themes and grooving them up with a bit more punch – swinging things ever so lightly as to brighten the mood that might otherwise make for a much bluesier album overall. Titles include Mel Torme's "Stranger in Town" plus "Don't Explain", "When Your Lover has Gone", "Sometimes I'm Happy", "Everybody's Somebody's Fool" and "You're Crying", "Blue Gardenia", and "Invitation".  © 1996-2021, Dusty Groove, Inc.
(Out of print.)

After Hours With Miss D
EmArcy, Early/Mid 50s. Used
CD...$7.99
Dinah's in a perfect setting here – one that gets more jazz out of her style than other records at the time! The "after hours" setting has Dinah singing with a relaxed jazz combo – one that features Eddie Lockjaw Davis and Paul Quinichette on tenor, Clark Terry on trumpet, ... CD

For Those In Love (with bonus tracks)
EmArcy, 1955. Used
CD...$4.99
Excellent small group jazz work from Dinah – of the sort that's often quite tough to find on vinyl, and which represents some of her best work of all time! The album's got a good group of Mercury jazz players – like Clark Terry, Paul Quinichette, Cecil Payne, Wynton Kelly, and Jimmy ... CD

Dinah Jams
EmArcy/Phonogram, 1954. Used
CD...$4.99 (CD...$11.99)
One of the best jazz-based sessions recorded by Dinah Washington in the 50s – appropriately titled Dinah Jams, which is a pretty good reference to the feeling of the set! The sessions were recorded in a relatively relaxed, intimate feel – not necessarily as unbridled as a true jam ... CD

Black Coffee And Other Delights – Decca Anthology (2CD set)
Decca, Mid 50s. Used 2 CDs
CD...$11.99
Brilliant work by Peggy Lee – very different than most of her later more pop-oriented recordings! Peggy signed to Decca as a solo act right after working with bigger bands in the 40s, and her recordings for the label are wonderful – featuring many ballads and torchy numbers, recorded ... CD

Blue Moon (Verve Master Edition)
Decca/Verve, 1956. Used
CD...$8.99
Some of the hippest early work ever cut by Carmen McRae – with backings by Tadd Dameron and Jimmy Mundy, and a great selection of songs that brings out all the sophistication in Carmen's style, yet stays away from overly-done standards and love numbers. The set's a perfect example of how ... CD