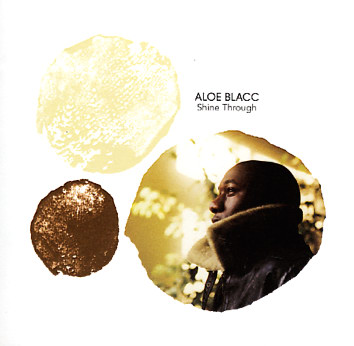 A batch of eclectic postmodern soul that's as original and instantly gratifying as anything we've heard on Stones Throw! Aloe Blacc more than lives up to the expectations we had for him after hearing his first couple of Stones Throw singles. His previous work in the adventurous hip hop outfit Emanon really only hints at his solo work – and it's even more bold in its idiosyncratic approach to an appealing groove! The almost entirely self-produced Shine Through (Oh No and Madlib produce one track each) is rife with an electronic sheen, touching on a bubbling psychedelic soul vibe we've never really heard before. A couple of tracks have guitar, bass, and keys that bring a more organic, but still kind of otherworldly groove – even touching on a cosmic Latin vibe on a couple of tunes! Tracks include "Whole World", a totally re-imagined take on Sam Cooke's "Long Time Coming" (produced by Oh No), "Are You Ready", "Busking", "Bailar", "Nascimento", "Dance For Life", "Patria Mia", "Shine Through", "Caged Birdsong", "Arrive", "Want Me", "One Inna" (produced by Madlib) and "I'm Beautiful".  © 1996-2020, Dusty Groove, Inc.

Invite The Light
Stones Throw, 2015. Used
CD...$5.99
Dam Funk does it again – really blowing us away with his crispy fresh version of funk – one that's a perfect fusion of old school modes from the 70s and 80s, and some of the more cosmic touches of the current century! The approach uses lots of splash on the keyboards and beats – ... CD