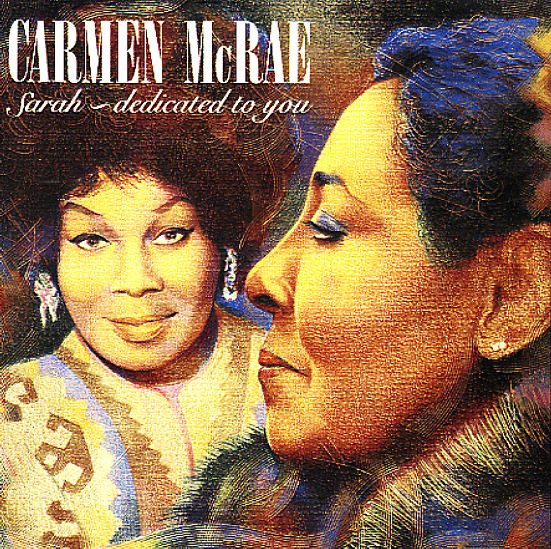 Sarah – Dedicated To You

Lover Man (Japanese pressing – with bonus tracks)
Columbia/Sony (Japan), 1962. Used
CD...$8.99 (CD...$3.99)
An overlooked gem from Carmen – one of her few albums for Columbia from the 60s, and a wonderfully swinging small group session that's got a much more relaxed feel than some of her earlier sets! The album's ostensibly a tribute to Billie Holiday – but it's taken in a way that's ... CD

I'm Coming Home Again
Jazz Around (Italy), 1978. Used
CD...$4.99
A great smooth soul session from Carmen McRae – an album that's not nearly as well known as her American sides of the 70s, but which is possibly even better overall! The record features a great batch of smooth soul arrangements by Mario Sprouse – a blend of jazz and contemporary soul ... CD

Portrait Of Carmen
Atlantic (Japan), 1968. Used
CD...$12.99
An excellent album from Carmen McRae – one of her hippest records ever, and a great set of vocal gems that often gets overlooked! Arrangements are by Benny Carter, Shorty Rogers, and Oliver Nelson – and the album's got a swinging groovy style that pushes Carmen past her straighter jazz ... CD

Fine & Mellow – Live At Birdland West
Concord, 1988. Used
CD...$7.99 (LP...$2.99)
A mighty nice setting for Carmen McRae, and a bit different than usual too – especially given that the backing group is a pretty soulful tenor/organ combo! Jack McDuff handles the Hammond, and Red Holloway plays both tenor and alto, with some nice comping from Phil Upchurch on guitar in the ... CD

Book Of Ballads (Japanese pressing)
Kapp (Japan), 1958. Used
CD...$14.99
Carmen McRae's book of ballads is a great set of standards – performed by a core trio that features Don Abney on piano, over larger backings by Frank Hunter! The set's a treasure from Carmen's early years – and is filled with dusky renditions of tunes that are familiar, but which have ... CD

Lover Man (with bonus tracks)
Columbia, 1962. Used
CD...$3.99 (CD...$8.99)
An overlooked gem from Carmen – one of her few albums for Columbia from the 60s, and a wonderfully swinging small group session that's got a much more relaxed feel than some of her earlier sets! The album's ostensibly a tribute to Billie Holiday – but it's taken in a way that's ... CD

Velvet Soul (It Takes A Whole Lot Of Human Feeling/Ms Jazz)
LRC/Laser Light, 1973/1974. Used
CD...$3.99
A great little CD – not only for the very nice price, but for the fact that the double-length set brings together two albums' worth of work that Carmen McRae recorded for the Groove Merchant label in the early 70s! The style here is strongly jazzy, but with a firm dose of soul too – ... CD

Sings The Blues (Japanese pressing)
RCA/BMG (Japan), 1967. Used
CD...$19.99
Nina's not just singing the blues here – she's completely reinventing the sound of the format – by drawing on a long tradition of vocal expression, and infusing it with the hipper, more personally exploratory mode she forged in the 60s! The album's got a subtle brilliance that means ... CD