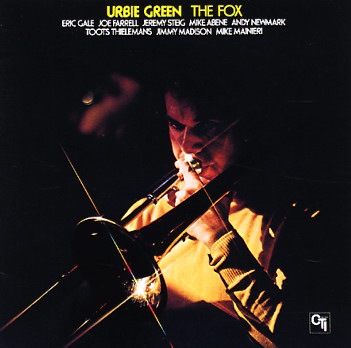 Smooth and silky jazz funk from trombonist Urbie Green – a record that's much more in a mainstream R&B fusion mode than his earlier work – yet also arranged by David Matthews in a soulful style that still keeps things pretty real on the best cuts! The group's a good one for the mellow groove of the material – and includes Mike Mainieri on keyboards, Eric Gale on guitar, Jeremy Steig on flute, and Toots Thielemans laying down a bit of harmonica – all kicking back in classic 70s CTI styles. Titles include the nice modal groover "Mertensia", plus "Manteca", "Foxglove Suite", "Another Star", and "Goodbye".  © 1996-2021, Dusty Groove, Inc.
(Original pressing with Van Gelder stamp. Includes the CTI inner sleeve. Cover has a cut corner, stuck gatefold, and some stuck-on paper on front.)

Jewels Of Thought
Impulse, 1969. Very Good- Gatefold
LP...$24.99 (CD...$18.99)
A wonderful reunion of Pharoah Sanders and vocalist Leon Thomas – and a set that captures a lot of the same energy as the pair's previous record – Karma! Thomas' vocals are in wonderful form for the set – stretching out soulfully on the extended classic "Hum-Allah-Hum-Allah-H ... LP, Vinyl record album

Wynton Kelly Piano (aka Whisper Not)
Riverside, 1958. Fair
LP...$49.99
A surprisingly wonderful set from Wynton Kelly – really fluid and swinging, and with a unique approach on half the material! The core group of the set features Kenny Burrell on guitar, Paul Chambers on bass, and Philly Joe Jones on drums – but then Jones sits it out on the second side ... LP, Vinyl record album

Battle Of Birdland
Roost, Late 50s. Fair
LP...$4.99
Heavy tenor from both of these giants – working here with a raw group that features Doc Bagby on Hammond and Charlie Rice on drums! Titles include "SOS", "Jaws", "Marchin", and "I Can't Get Started" – all nice and long! LP, Vinyl record album