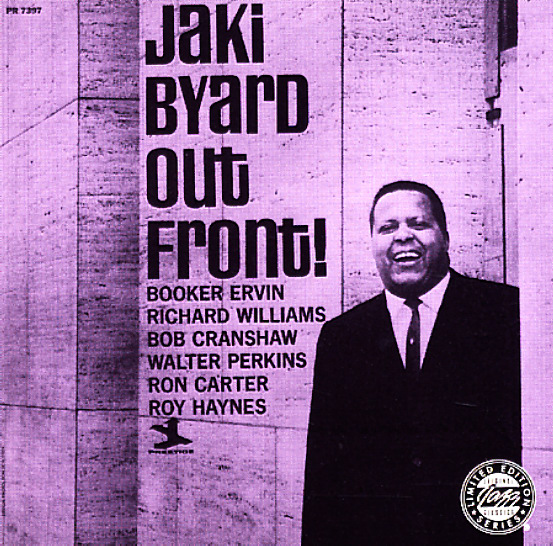 Out Front! (with unissued bonus tracks)

One of the greatest records ever from pianist Jaki Byard – a razor-sharp set that features some tremendous work from tenorist Booker Ervin and trumpeter Richard Williams! Byard starts out the set in trio formation for the first two numbers – echoing the great qualities of his earlier albums for New Jazz/Prestige – and then Ervin and Williams slide in on the following two tracks – really expanding the sound with a nice sense of added fire. Both players are a perfect fit for Byard – schooled in a Mingus modernist sensibility that has them really pushing the edges, but never going too far out or getting too free. A few numbers have almost a gutbuckety sense of soul – one that stretches back over previous eras of jazz expression – and titles include "Searchlight", "European Episode", "Out Front", "Two Different Worlds", and "When Sunny Gets Blue" – a track that has Byard on alto and piano, recorded a few years before. This CD includes two previously unreleased tracks, "I Like To Lead When I Dance" and "After The Lights Go Down Low."  © 1996-2021, Dusty Groove, Inc.
(Out of print.)

Night Hawk
Swingville/OJC, 1960. Used
CD...$14.99
Beautiful late work from Coleman Hawkins – mellow genius that wins us over time and time again over the years! The set's actually a twin-tenor outing – with both Hawk and Eddie Jockjaw Davis – the latter of whom, as proved with Johnny Griffin and others, is a perfect partner for ... CD