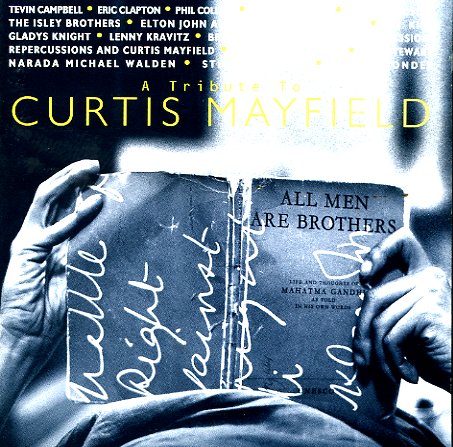 An all-star tribute to the great Curtis Mayfield – served up by a generation of artists who were influenced by his classic work! The set mixes soul singers and pop stars – in a really surprising lineup of tracks that includes "The Makings Of You" by Aretha Franklin, "Choice Of Colors" by Gladys Knight, "Gypsy Woman" by Bruce Springsteen, "I'm The One Who Loves You" by Stevie Wonder, "Woman's Got Soul" by BB King, "Keep On Pushin" by Tevin Campbell, "Fool For You" by The Impressions & Bradford Marsalis, "I'm So Proud" by The Isley Brothers, "Look Into Your Heart" by Whitney Houston, "Billy Jack" by Lenny Kravitz, "Amen" by Elton John & The Sounds Of Blackness, "If There's A Hell Below" by Narada Michael Walden, and "Let's Do It Again" by The Repercussions and Curtis Mayfield himself!  © 1996-2022, Dusty Groove, Inc.
(Out of print.)