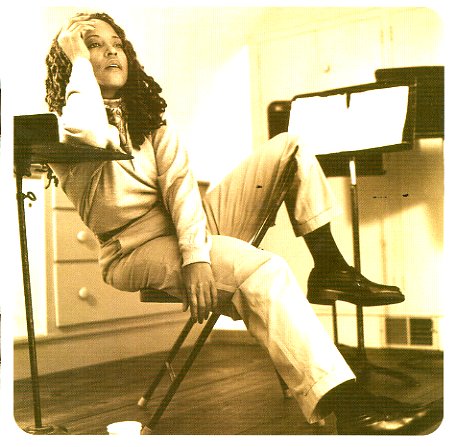 Cassandra Wilson's tribute to Miles Davis – a pretty brave and ambitious move, writing lyrics to classic Miles compositions – and a winning one! Wilson produced the record, too, and her genuine love of the material makes it worth – as does her fairly earthy, timeless production. Made in the late 90s, and it honestly hasn't aged a day. Very impressive! It's a Miles-centric set, but there's a couple non-Miles numbers too, and the titles include "Run The Voodoo Down", "Traveling Miles", "Time After Time", "When The Sun Goes Down", "Someday My Prince Will Come", "Resurrection Blues (Tutu)", "Piper", "Prancing", "Right Here, Right Now" and more.  © 1996-2020, Dusty Groove, Inc.
(Out of print.)

Calling – Celebrating Sarah Vaughan
Blue Note, 2001. Used
CD...$1.99
The lovely Dianne Reeves pays tribute to jazz legend Sarah Vaughn, in a set that's one of her straightest jazz outings to date! The album features arrangements by Billy Childs, who plays on the album, along with Mulgrew Miller, Clark Terry, Reginald Veal, and Steve Wilson. Tracks include the ... CD

Vocalise
Blue Note, 1997. Used
CD...$2.99
With Joe Lovano on tenor, who also produced the album and arranged two of the tracks. CD