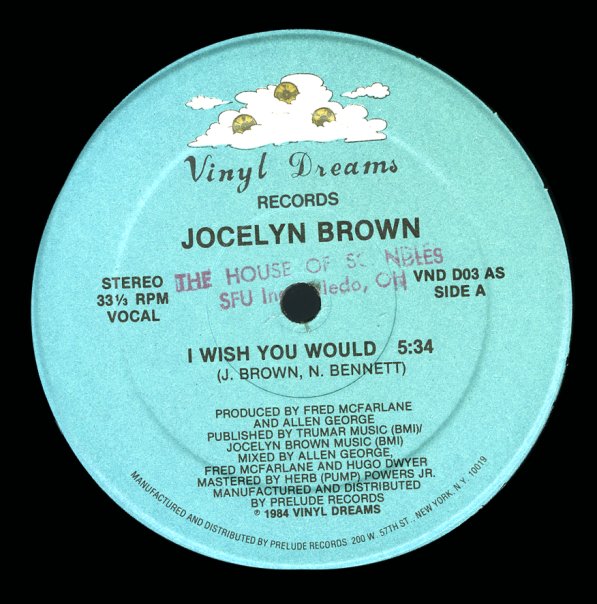 I Wish You Would (voc, dub)

A pretty nice tune from Jocelyn – circa the "Somebody Else's Guy" era. Not as much of an uptempo number as that one, with a midtempo smooth soul groove that's pretty nice, handled with a bit of a club type beat.  © 1996-2022, Dusty Groove, Inc.

Mr Rhythm/Keep On Dancing
TK, 1977. Near Mint-
12-inch...$11.99
King Sporty was one of the lesser-known players in the Miami scene of the 70s – but his work for TK is right up there with the label's better club tracks. This single sports production by George Perry, and a pretty nice flanged-out disco sound on both tracks. 12-inch, Vinyl record

Body To Body Boogie/Moon Boots
Salsoul, 1977. Near Mint-
12-inch...$24.99
Snapping bass and slow-stepping drums make "Body To Body" boogie" a great little track – one that moves along slowly, and with a much funkier edge than you'd expect! "Moon Boots" is moogy wonderfulness from the Munich scene – a tune that's as spacey as you'd ... 12-inch, Vinyl record

B & G Rhythm (double a-side single)
Polydor, 1978. Near Mint- (pic cover)
12-inch...$4.99
The title track from the one and only album by B&G Rhythm – a nicely snapping number with great Wayne Henderson production, and a spacey blend of jazz and funk that would be right at home on Fantasy Records! Lots of nice keyboards in the mix here, but the tune's also got some warmer ... 12-inch, Vinyl record

Number One/1000 Laughs
ABC, 1978. Sealed
12-inch...$4.99
A Philly-styled groover from Eloise Laws – a tune that's got plenty of rolling clubby rhythms on the intro, then gives way to a great soulful lyric that almost hearkens back to Ella's earlier days! "1000 Laughs" is pretty good too – also upbeat, but somehow just a few notches ... 12-inch, Vinyl record