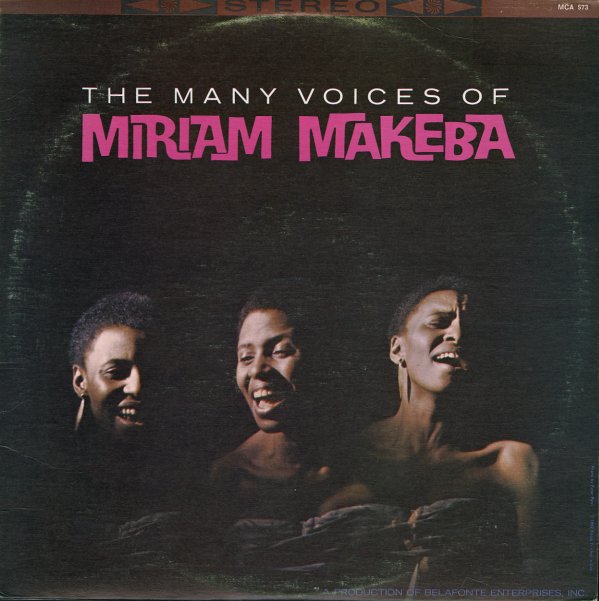 A great album – even if Miriam's not in as many voices as promised by the title! (Who do they think she is – Rich Little?) The recording quality appears to be live – as the tracks have an open jamming style, with Miriam singing in that rich, folksy style of her early years, while a small combo backs her up on guitar, bass, and percussion, plus some trumpet by Hugh Masekela. Titles include "Nagula", "Can't Cross Over", "Night Must Fall", "Liwa Wechi", "Kilimanjaro", and "Ngola Kurila".  © 1996-2021, Dusty Groove, Inc.
(Stereo pressing. Cover has light aging.)

Magic Of Makeba
RCA, 1966. Near Mint-
LP...$9.99
A bit of a mainstream effort from Makeba, as this set features more of an emphasis on pop material and standards than on some of her other records. Sid Bass conducted and arranged the orchestral backing on the folk and sixties pop classics, which doesn't leave as much room for her vocal stylings ... LP, Vinyl record album

Makeba!
Reprise, Late 60s. Very Good+
LP...$9.99
Very nice work from Miriam Makeba – who by this point is really hipping up her style a lot, taking the earlier folksy sound and infusing it with a bit more of the Hugh Masekela-driven African soul styles of the late 60s. Jerry Ragovoy produced the record, and he and Miriam handled all the ... LP, Vinyl record album