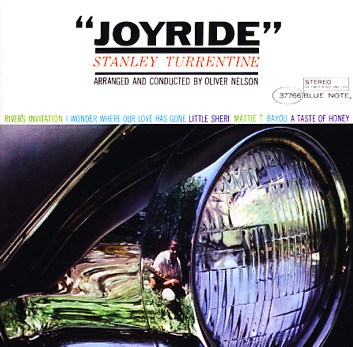 A very successful album for Blue Note – and one that took the searing tenor sax of Stanley Turrentine and backed it with some boldly soulful arrangements from Oliver Nelson! Nelson was perfect at this sort of session – able to provide full backings that infused the record with energy, yet never dominated the space of the soloist – and Turrentine really rises to the occasion here, and matches the quality heard in similar Nelson sessions with Jimmy Smith, Lou Donaldson, and Cannonball Adderley! Other players in the core group here include Kenny Burrell and Herbie Hancock – but Stan's the main star of the set with his gutsy tenor lines, all blown beautifully in a way that points towards his later experiments in this mode. Titles include "Bayou", "Mattie T", "Little Sheri", and "River's Invitation" – and the CD features the bonus tracks "Gravy Train" and "A Kettle Of Fish".  © 1996-2020, Dusty Groove, Inc.
(Out of print.)