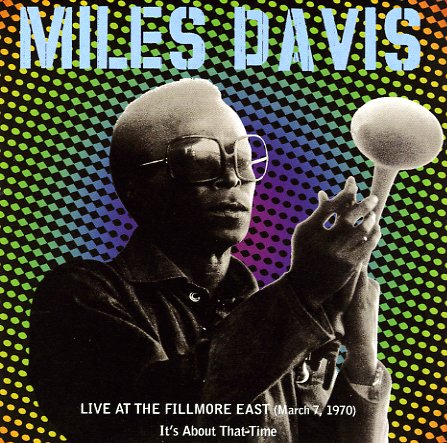 Live At The Fillmore East – It's About That Time

Previously-unreleased live work by one of Miles Davis' most important groups ever – a Bitches Brew-era lineup, playing live at the Fillmore East a month before the record was released to the public – which makes this performance one of the first times the world had ever heard jams like this! The group's heavy on rhythm here – a rumbling groove brought up from the bottom, courtesy of the drums of Jack Dejohnette, basses of Dave Holland, and percussion of Airto – sewn together beautifully by the Fender Rhodes work of Chick Corea – easily some of the noisiest sounds the instrument ever produced! Miles plays trumpet, and Wayne Shorter's on soprano and tenor sax – on titles that include "Directions", "Spanish Key", "Masqualero", "Miles Runs The Voodoo Down", "Bitches Brew", and "It's About That Time/Willie Nelson".  © 1996-2021, Dusty Groove, Inc.
(Out of print, BMG Direct pressing.)