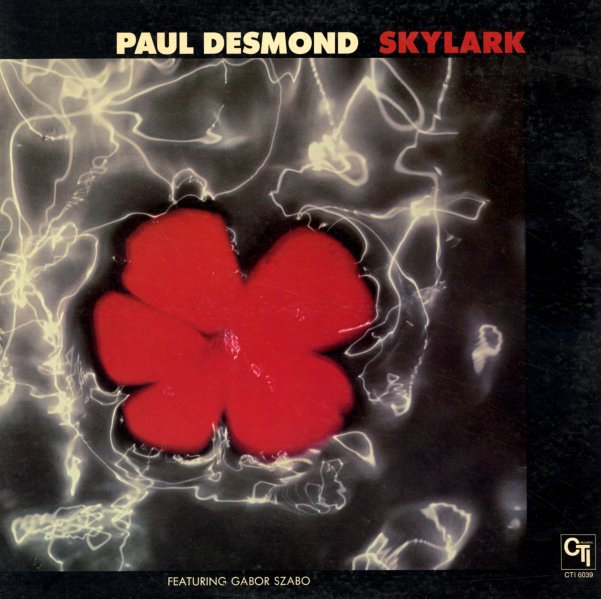 A stunning 70s set from the great Paul Desmond – one that has the tremendous alto player finding an even fresher groove than before – yet all without losing any of the class and control that made him so great in the 50s and 60s! Don Sebesky arranged the set, but most of the instrumentation is nice and lean – small group modes that allow Paul's alto to soar out in the lead, often alongside some excellent guitar work from Gabor Szabo and Gene Bertoncini – the latter of whom provides accompaniment that takes us back to some of Jim Hall's music with Desmond. Bob James plays a bit of piano on the record, and rhythm is by Ron Carter on bass, Jack DeJohnette on drums, and Ralph MacDonald on percussion – plus a bit of cello from George Ricci, who shades tunes in with a mighty nice sound. But as you'd guess, the main focus is on Desmond's sublime alto sax – on titles that include "Was A Sunny Day", "Take Ten", "Music For A While", and of course, "Skylark".  © 1996-2021, Dusty Groove, Inc.
(Out of print.)

Pure Desmond (Gold CD)
Epic/Legacy, 1974. Used
CD...$14.99 (CD...$5.99)
An album of sublime understatement from alto genius Paul Desmond! Desmond was one of the few players who resisted the lure of the 70s electric CTI sound – and stuck pretty much in his usual bag of easy-going grooves, blowing alto with effortless ease, working here with a quartet that ... CD

Bossa Antigua (with bonus tracks)
RCA, 1965. Used
CD...$5.99
The team of Paul Desmond and Jim Hall was one of the best ideas ever forged in American jazz of the 60s – and the icy pair are perfect company together on this album of bossa-inflected tracks with a very cool edge! The album allows Desmond's alto to take on a warmth and flowing quality it ... CD

Take Ten Plus (with bonus tracks)
RCA, 1963. Used
CD...$4.99
That's "Take Ten", not "Take Five" – a great title cut that echoes Paul Desmond's previous work with Dave Brubeck – but which then gives way quickly to some sweet bossa-styled grooves done with guitar from Jim Hall! The album's one of the strongest of the ... CD

United
CBS/Wounded Bird, 1981. Used
CD...$29.99
Damn wonderful work from Woody Shaw – a sublime set for Columbia Records, and one that's head and shoulders above most major label jazz of its generation! Woody's still in his most soulful modes here – the soaring, spiritual, joyous tones we always love in his Muse Records work from a ... CD

Banned In Boston (aka Illinois Jacquet)
Portrait/CBS, 1962. Used
CD...$8.99
Excellent later work by Illinois Jacquet – right on a par with his best recordings for Verve, and a great example of the strength of his tenor playing, which didn't always surface as well in large group recordings. The record features Jacquet in the company of a number of smaller groups ... CD

Classic Encounter
CBS, 1988. Used
CD...$6.99
The Ramsey Lewis Trio encounters Chi-Town arranger James Mack and the Philharmonia Orchestra. Tracks include "After The Rain", "Spiritual", "Summer Of '42", "With A Gentle Touch", and "Earle Of Salisbury Pavane". CD

Miles In Tokyo – Live In Concert (Japanese pressing)
CBS/Sony (Japan), 1964. Used
CD...$9.99
Miles Davis' first-ever performance in Japan – a really unique concert that featured the quintet with Herbie Hancock, Ron Carter, and Tony Williams – augmented by a young Sam Rivers on tenor! The presence of Rivers really gives the set an edge – and although Miles is holding Sam ... CD