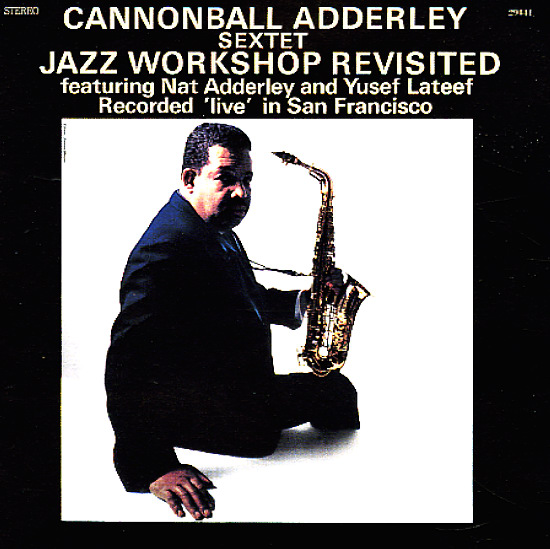 A great live classic from the Cannonball Adderley Sextet of the early 60s – that famous group that included Nat Adderley on cornet, Yusef Lateef on tenor and flute, Joe Zawinul on piano, Sam Jones on bass, and Louis Hayes on drums! Tracks are long, and these guys are really on fire in a live setting – and titles include a stellar 11 minute version of "The Jive Samba", one of Cannonball's greatest track – plus "Primitivo", "Lillie", and "Mellow Buno". CD includes the bonus track "Unit 7"!  © 1996-2021, Dusty Groove, Inc.
(Out of print.)

Portraits In Jazz – Live At The Half Note
Hi Hat, 1965. Used
CD...$12.99
A smoking live set from Cannonball Adderley – one recorded in a space between his famous concert albums for Riverside and Capitol Records – and equally as great as any of them! The group's got a slightly unique lineup – in that Charles Lloyd is in the combo on tenor sax – ... CD

Cannonball Adderley & His Quintet En Concert
Europe 1, 1969. Used
CD...$7.99
A hip little live set from Cannonball – recorded at the end of the funky 60s, in Paris, with Joe Zawinul on keyboards, and in the same long electric tradition as his famous Country Preacher album! The tracks include some of the gems from the Capitol years – stretched out and served up ... CD

Great Love Themes – The Cannonball Adderley Quintet With Strings x
Capitol (Japan), Mid 60s. Used
CD...$28.99
A nice once – certainly not as funky as some of Cannon's other work for Capitol, but with a dark edge that really makes it great! The core Cannonball quintet of Nat Adderley, Joe Zawinul, et al, is set up in string arrangements by Ray Ellis – a bit flowery at times, but in a way that ... CD

Cannonball Takes Charge (Landmark)
Riverside/Landmark, 1959. Used
CD...$6.99
A hardbop classic from Cannonball Adderley – and one of his harder to find albums from the Riverside days! The set has Cannon playing without his usual group, in the context of an all-star batch of players that includes Wynton Kelly, Paul Chambers, and Jimmy Cobb – who he worked with ... CD

Phenix
Fantasy, 1975. Used
CD...$11.99
Sweet funky 70s work from Cannonball Adderley – a record that has him revisiting older tunes from his early soul jazz years – but in ways that give them a whole new electric vibe overall! The album's actually Cannonball's last full studio set, but it's also one of his greatest too ... CD

Cannonball In Japan
Capitol, 1966. Used
CD...$8.99
A rare live set by Cannonball Adderley – unreleased in America at the time, and performed with the style of Cannon's best work for Riverside! The album's very similar to some of the group's best live sets for Riverside – like the San Francisco or other Tokyo recording – done with ... CD

Jazz Workshop Revisited – Cannonball Adderly Collection Vol 3
Capitol/Landmark, 1962. Used
CD...$9.99
A great live classic from the Cannonball Adderley Sextet of the early 60s – that famous group that included Nat Adderley on cornet, Yusef Lateef on tenor and flute, Joe Zawinul on piano, Sam Jones on bass, and Louis Hayes on drums! Tracks are long, and these guys are really on fire in a live ... CD

Homecoming!
Riverside, 1961/1992. Used
CD...$12.99
A great little album that Hope made upon his return to the east coast in the early 60s – not too long before he passed away. Half the tunes are cut with a sextet that features Blue Mitchell, Frank Foster, and Jimmy Heath – and the other are cut with a trio that features Hope, Percy ... CD