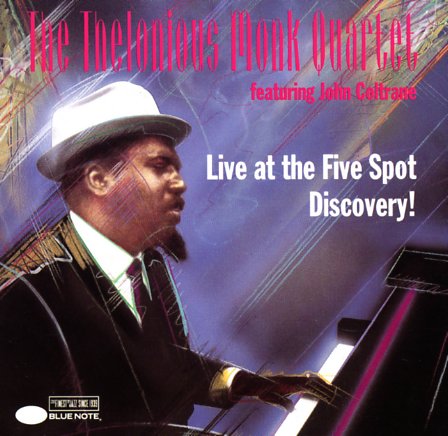 A rare glimpse of the Thelonious Monk Quartet with John Coltrane – recorded in Monk's home turf of The Five Spot by Coltrane's wife at the time! The recording was done on a portable tape recorder, but the overall quality is surprisingly strong – not in stereo, but with more than enough depth to capture the interplay between Monk and Coltrane in the more relaxed, open setting of the club. 3 of the tracks on the set are quite long – "Trinkle Trinkle", "In Walked Bud", and "I Mean You" – and they're complemented by 2 shorter tunes – "Epistrophy" and "Crepuscule With Nellie". Group features Roy Haynes on drums and Ahmed Abdul-Malik on bass.  © 1996-2022, Dusty Groove, Inc.
(Out of print.)

Underground
CBS (UK), 1968. Used
CD...$4.99 (CD...$4.99)
One of the most gimmicky cover images ever used to sell the music of Thelonious Monk (and Monk himself hated the image) – but a key classic from his legendary years at Columbia Records! The album's got an edge that definitely lives up to its title – even if the cover photo is a bad ... CD

Memorial Album (RVG remaster edition)
Blue Note, 1953. Used
CD...$7.99 (CD...$3.99)
Clifford Brown only recorded a handful of sides for Blue Note – but all of the best ones are included in this excellent album – a full length set that culls together Brown's material from the 10" years, issued as a memorial to his early death in 1956! Side one features Brown with ... CD