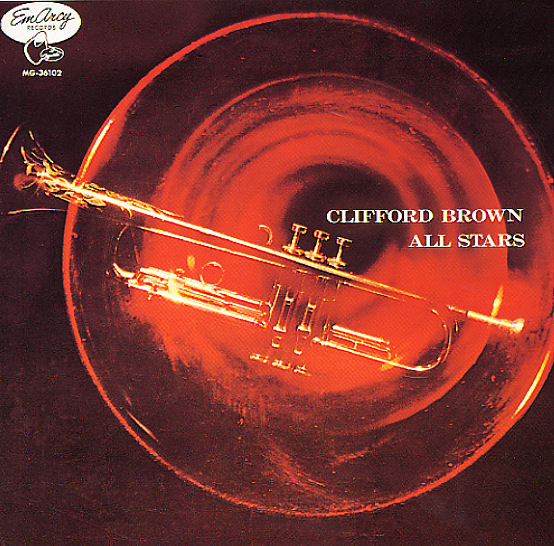 Also available
Clifford Brown — Clifford Brown All Stars ... LP 13.99
A key slice of Clifford Brown from the 50s – two long tracks both recorded in an open-ended jam session format, showing a side of Brown's powers that's even bolder and more inventive than some of his previous studio work! The album soars along beautifully – with Brownie in the lead amongst an unusual, but well-chosen batch of players that includes Herb Geller and Joe Maini on alto saxes, Walter Benton on tenor, Kenny Drew on piano, Curtis Counce on bass, and Max Roach on drums – all grooving alongside Clifford on the album's nicely extended tracks. The album was released after Brown's death in 1956, features the side-long tracks "Caravan" and "Autumn In New York". CD also features a bonus take on "Caravan" – much shorter, called "Caravan (The Boss Man)".  © 1996-2022, Dusty Groove, Inc.
(Out of print late 90s version. Includes obi.)

Clifford Brown With Strings
EmArcy, 1955. Used
CD...$5.99
A classic "with strings" session from Clifford Brown – nearly as well-done and perfect as some of Charlie Parker's sides for Verve, handled here with perhaps a slightly sweeter touch, as Neal Hefti's the man on arrangements. The core group's the Brown/Roach combo, augmented by a ... CD

Brownie Lives! – Live At Basin Street & In Concert At Carnegie Hall
Fresh Sound (Spain), 1955. Used
CD...$16.99
Great live work from the Clifford Brown/Max Roach group of the 50s – including material recorded at Basin Street in 1956, but different than the classic Emarcy album of the same name! These Basin Street sides are from April and May of 1956 – and feature a group with Sonny Rollins on ... CD

Complete Blue Note & Pacific Jazz Recordings (4CD set)
Blue Note/Pacific Jazz, Early 50s. Used 4 CDs
CD...$24.99
Seminal work from one of the greatest trumpeters of the postwar years – captured here right before his famous association with drummer Max Roach in the final years of his life! The set brings together everything that Clifford Brown recorded for both the Blue Note and Pacific Jazz labels ... CD

Brown & Roach Incorporated
EmArcy, 1955. Used
CD...$5.99
Quite possibly THE key example of the magic of Clifford Brown and Max Roach on record – a brilliant studio session that really has the group "incorporating" their sound – forging a bold musical statement that would forever leave its imprint on jazz for years to come! The ... CD

Across The Crystal Sea
EmArcy, 2008. Used
CD...$8.99
Really lovely work from pianist Danilo Perez – a set that features some wonderful orchestrations from Claus Ogerman, who brings a similar spirit to the record as some of his best backings in the 70s! The core group features Perez on piano with a hip rhythm duo of Christian McBride on bass ... CD