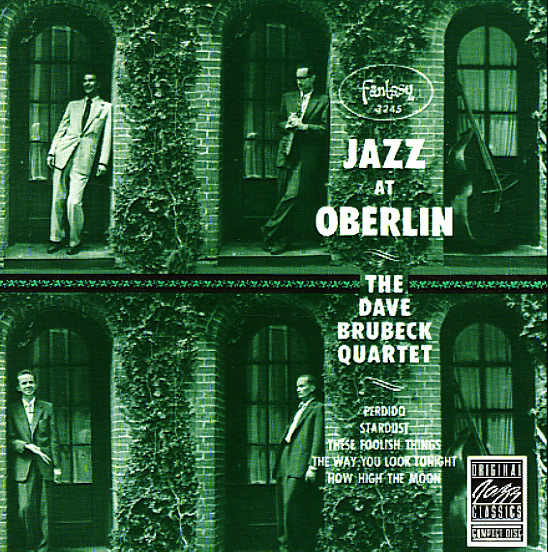 A classic album from Dave – recorded at Oberlin College, the mid-Ohio haven of bohemiana, and a growing hotbed of jazz activity centered around students in the college's conservatory of music. Dave and crew made the trip at the request of the kids – breaking from their mostly San Francisco-based recording career to cut what would end up becoming a very successful album in Dave's catalog, and begin a whole "at" or "goes to" series in his career. The group's the early quartet with Paul Desmond, Lloyd Davis, and Ron Crotty – and tunes include long and jamming versions of "The Way You Look Tonight", "How High The Moon", and "Stardust".  © 1996-2020, Dusty Groove, Inc.
(Out of print.)

Jazz At Oberlin (20 bit remaster)
Fantasy, 1953. Used
CD...$6.99
A classic album from Dave – recorded at Oberlin College, the mid-Ohio haven of bohemiana, and a growing hotbed of jazz activity centered around students in the college's conservatory of music. Dave and crew made the trip at the request of the kids – breaking from their mostly San ... CD

Truth Is Fallen/Two Generations Of Brubeck
Atlantic/Collectables, 1972/1974. Used
CD...$8.99
Truth Is Fallen is a complicated orchestral work – with Brubeck's piano, and backing from both the Cincinnati Symphony and the rock group New Heavenly Blue! Two generations, four Brubecks – an all family affair from the early 70s! Patriarch Dave Brubeck leads the sons through some of ... CD

Jazz Impressions Of New York
Columbia, 1964. Used
CD...$3.99
New York's a mighty big place, but it's got a nicely intimate feel in this 60s set from the Dave Brubeck Quartet – one of the combo's overlooked gems from their years on Columbia! The music is all from the TV show Mr Broadway, but there's hardly a showtune feel to the set – and instead ... CD

Jazz At The College Of The Pacific Vol 2
Fantasy/OJC, 1953. Used
CD...$4.99
Dave Brubeck on piano with Paul Desmond on alto saxophone, Ron Crotty on bass & Joe Dodge on drums. CD

Gone With The Wind
Columbia, Late 50s. Used
CD...$4.99
A surprisingly nice little album from Brubeck – one that's mostly comprised of old-fashioned type tunes, but which all take on a hip new light in the hands of his classic quartet! As usual, Paul Desmond's one of the main assets of the set – working with Brubeck to forge a slightly off-b ... CD