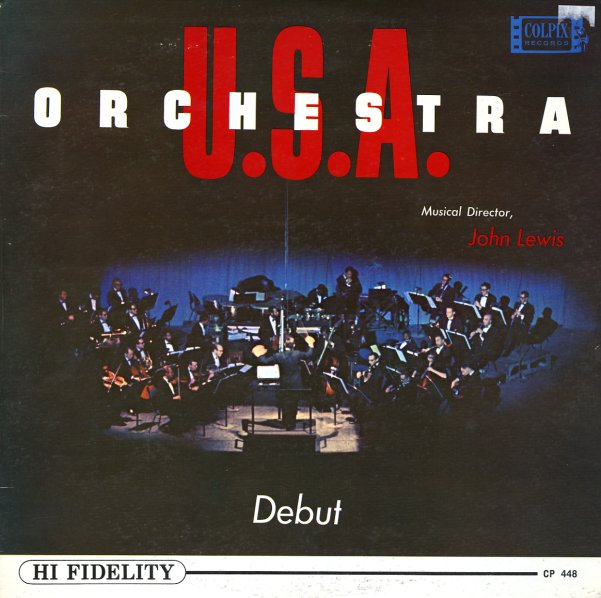 The first recordings ever from Orchestra USA – the landmark third stream jazz group co-led by John Lewis and Gunther Schuller! The group sprang out of Schuller and Lewis' preoccupations with bringing jazz to a more serious environment – merging traits of 20th century classical with jazz-based improvisation – in a format that included standout solo players, as well as larger backings from strings and woodwinds. And while some of that group's recordings were a bit dull, this one's totally great – not nearly as stiff and academic as you'd think – with some really strong solo work on saxes, and a soulful approach that gets past any formalism that could mar the proceedings. Players include Eric Dolphy, Phil Woods, Leo Wright, Nick Travis, and Jim Hall – and titles include "Three Little Feelings (parts 1, 2, & 3)", "Milesign", "Milano", "Natural Affection", and "Donnie's Theme".  © 1996-2023, Dusty Groove, Inc.
(Cover has a small trace of a price sticker, some surface wear, and aging.)

Jazz Mission To Moscow
Colpix, 1962. Very Good+
LP...$1.99 2.99
Jazz from the heart of the cold war – not actually recorded in Moscow, but featuring a bunch of hip players on their return from a tour of the Soviet Union – a historic moment in which west met east, with some groovy jazz in the offing! Apart from the tenor of Zoot Sims and alto of ... LP, Vinyl record album

Broadway Soul
Colpix, 1966. Very Good+
LP...$11.99
A lost Sonny Stitt session from the 60s – but wonderfully swinging, and with a groove that really works well! The album's a set of Broadway tunes played jazz-wise – but in the hands of Stitt, they come up wonderfully – stretching out with soulful intensity that's mighty nice, ... LP, Vinyl record album