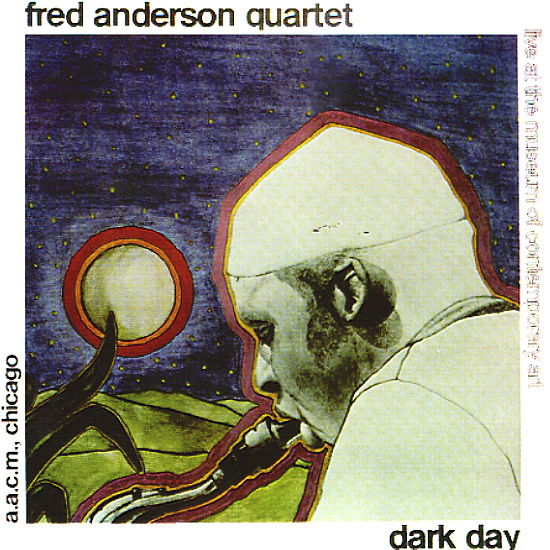 A great 2CD set that captures the genius of Fred Anderson during his prime years as a spokesperson for Chicago's AACM! Anderson's style has changed quite a bit since these rare recordings – making them important for understanding his progression as a musician, not to mention essential if you're a fan of his work, or the spiritual strands of the AACM during the 70s. The group on both records features Anderson on tenor, Billy Brimfield on trumpet, Steven Palmore on bass, and Hamid Drake on drums and tablas. The first disc features the Dark Day album, issued briefly by Message records in Europe in 1979, and the second disc features a previously unissued live set, recorded in Verona in 1979, featuring material that complements the Dark Day set very nicely! Titles include "Saxoon", "Dark Day", "Three On Two", "The Prayer", and "The Bull".  © 1996-2022, Dusty Groove, Inc.
(Out of print. Barcode has a cutout hole.)

Timeless – Live At The Velvet Lounge
Delmark, 2005. Used
CD...$11.99
One of the last live dates captured at Fred Anderson's original Velvet Lounge location – a hotbed of creative jazz energy in Chicago, summed up here perfectly by the power of performance! Anderson's working in a trio with Harrison Bankhead on bass and Hamid Drake on drums – free, but ... CD

Burn The Incline
Atavistic, 2000. Used
CD...$5.99
More greatness from the Vandermark 5 – and proof that the genius of Ken Vandermark is burning brighter than ever! The set features 8 razor sharp tracks – including "The Trouble Is", "Ground", "In Focus", "The Cooler", and "Roulette". CD

Acoustic Machine
Atavistic, 2001. Used
CD...$6.99
Brilliant new work by the Vandermark 5 – Chicago's groundbreaking avant jazz ensemble headed by Ken Vandermark, and featuring Jeb Bishop on trombone, Kent Kessler on bass, Tim Mulvenna on drums, and Dave Rempis on alto and tenor. The group's got a poise and a brilliance that recalls the best ... CD

Jazz At NBC Series
Roulette/Roost (Japan), 1952/1953. Used
CD...$18.99
Some of the best early work by jazz guitarist Johnny Smith – featuring his group that included Stan Getz on tenor! The sides were recorded in the early 50s, when Smith was virtually pioneering the light touch on jazz guitar, a sound that was perfect for the breezy tone of Getz. Tracks on ... CD

Jazz At NBC Series
Roulette/Roost (Japan), 1952/1953. Used
CD...$18.99
Some of the best early work by jazz guitarist Johnny Smith – featuring his group that included Stan Getz on tenor! The sides were recorded in the early 50s, when Smith was virtually pioneering the light touch on jazz guitar, a sound that was perfect for the breezy tone of Getz. Tracks on ... CD