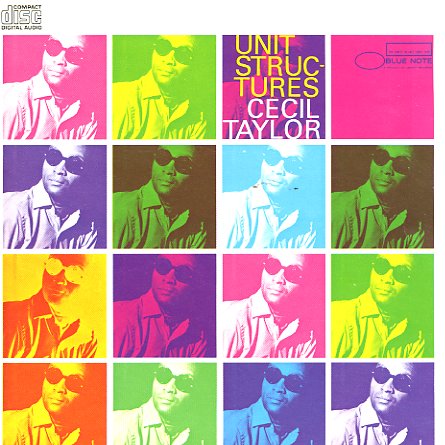 One of a rare few albums done by pianist Cecil Taylor for the Blue Note label in the 60s – some of the most outside work recorded for the imprint at the time! The word "structures" here is perhaps a bit misplaced – as the work has a strong sense of freedom with the soloists – who operate based on a system of energy and impulses described by Taylor in the notes, at a level that's maybe one of his most inventive, ambitious expressions of the decade! The whole lineup is great – with especially strong horn work from Eddie Gale on trumpet, Jimmy Lyons on alto, and Ken McIntyre on alto, oboe, and bass clarinet – and Taylor's piano gets accompaniment from two groundbreaking bassists – Henry Grimes and Alan Silva – plus drums from Andrew Cyrille. Given the lineup, and the format, the whole thing almost feels more like one of the BYG/Actuel avant sessions than Blue Note in the 60s – and titles include "Steps", "Enter Evening (Soft Line Structure)", "Unit Structure/As Of A Now/Section", and "Tales (8 Whisps)".  © 1996-2021, Dusty Groove, Inc.
(Out of print.)

Conquistador!
Blue Note, Late 60s. Used
CD...$6.99 (CD...$6.99)
One of Cecil Taylor's most striking albums of the 60s – and one of the few in which he works with a larger than usual group – not a trio or quartet, but an ultra-hip sextet! The lineup is incredible – the cream of the arch-modern players of the avant era, including Bill Dixon on ... CD

Conquistador! (RVG Remaster Edition)
Blue Note, Late 60s. Used
CD...$6.99 (CD...$6.99)
One of Cecil Taylor's most striking albums of the 60s – and one of the few in which he works with a larger than usual group – not a trio or quartet, but an ultra-hip sextet! The lineup is incredible – the cream of the arch-modern players of the avant era, including Bill Dixon on ... CD

Jazz Advance
Blue Note, 1956. Used
CD...$6.99
One of the best pre-1960 sessions by Cecil Taylor, recorded in Boston in 1956, and originally issued on the totally rare Transition label in a very small pressing! Taylor's playing here with the great bassist Buell Neidlinger, one of his prime compatriots in the early days, plus the great drummer ... CD