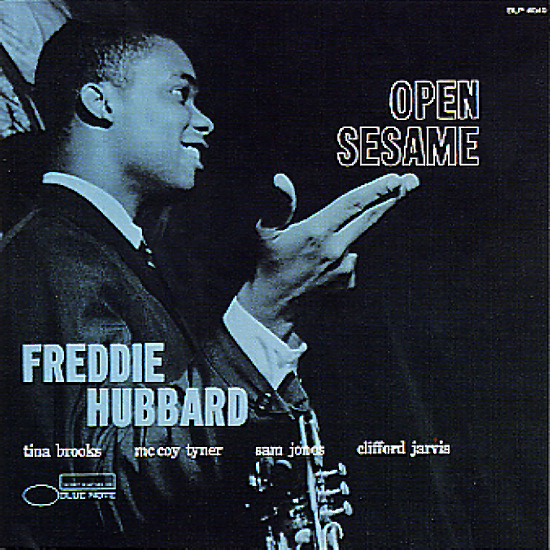 Also available
Freddie Hubbard — Open Sesame (with bonus tracks) ... CD 6.99
Seminal work from Freddie Hubbard – an early hardbop session that features some great work by Tina Brooks on tenor, piano by McCoy Tyner, and rhythm from the team of Sam Jones on bass Clifford Jarvis on drums! And although Freddie's great at this early point in his career – playing with a brash, urgent tone that's totally compelling – we're even bigger fans of the Tina Brooks work on this record! Brooks' tone is amazing – right up there with the style he used on his own rare few Blue Note sides, full of fresh fire and a really edgey approach to the tenor – and together with Hubbard, he helps craft a tight little set that's one of Hubbard's best-ever straight sides from the 60s. Titles include "But Beautiful", "One Mint Julep", "Hub's Nub", "Open Sesame", and "Gypsy Blue". Plus, the CD features bonus alternate takes of "Open Sesame" and "Gypsy Blue".  © 1996-2022, Dusty Groove, Inc.
(2002 RVG pressing.)

Breaking Point!
Blue Note, 1966. Used
CD...$9.99
Pivotal work from trumpeter Freddie Hubbard – a tight, edgy quintet performance that's done with a modern jazz sound that approaches the Blue Note "new thing" sound, but which stays just this side of the fence to keep in line with Freddie's other soulful work of the 60s – yet ... CD

Goin' Up
Blue Note, 1961. Used
CD...$11.99 18.99
A real burner from Freddie Hubbard's early years at Blue Note – filled with rich hues, colors, and tones! The group's a quintet – supported by lyrical rhythms from the trio of McCoy Tyner on piano, Paul Chambers on bass, and Philly Joe Jones on drums – working alongside Freddie's ... CD

Open Sesame (with bonus tracks)
Blue Note, 1960. Used
CD...$6.99
Seminal work from Freddie Hubbard – an early hardbop session that features some great work by Tina Brooks on tenor, piano by McCoy Tyner, and rhythm from the team of Sam Jones on bass Clifford Jarvis on drums! And although Freddie's great at this early point in his career – playing ... CD

Artistry of Freddie Hubbard (Impulse pressing)
Impulse, 1962. Used
CD...$8.99
A beautiful album that we'd rank as one of Freddie Hubbard's greatest recordings ever – a truly sublime set that's quite different than his Blue Note work of the 60s, and which really shows him emerging as a major talent on the trumpet! The set features a core sextet of key players – ... CD