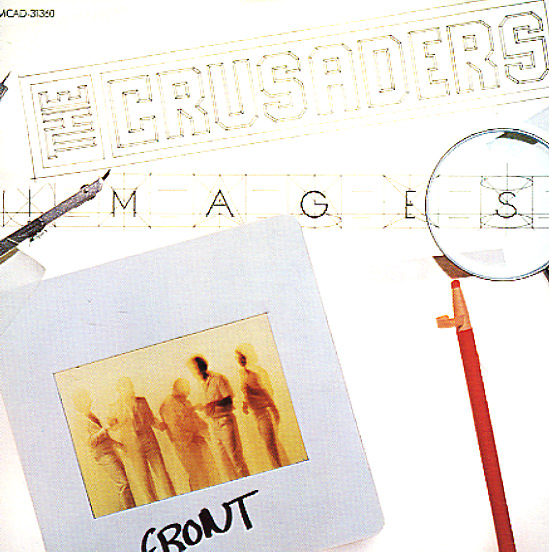 Hard to miss with The Crusaders at this point – and the album's one of their stone classics from the 70s – just the kind of soulful fusion that few other groups could touch! The core trio of Joe Sample's keyboards, Wilton Felder's saxes, and Stix Hooper's drums is augmented by the guitar of Billy Rogers and bass of Robert Popwell – both players who slide in warmly to the grooves, yet still help the combo keep that lean, funky sound they first forged after dropping the first word from their Jazz Crusaders name. Things are never slick at all, and the use of vocals and larger instrumentation is yet to come – leaving the album a tight, right, outta sight groover all the way through! Titles include "Fairy Tales", "Merry Go Round", "Cosmic Reign", "Snowflake", "Covert Action", and "Bayou Bottoms".  © 1996-2021, Dusty Groove, Inc.
(Out of print. Cover some wear, barcode has a cutout mark.)

Street Life
MCA, 1979. Used
CD...$5.99 (LP...$9.99)
One of our favorite albums ever from The Crusaders – a set that really sums up all the tightness they'd forged in the 70s, while still showing a new sense of soul and funk as well – expertly balanced with flawless LA production! The album may well be the group's equivalent of a Steely ... CD

Have Trumpet Will Excite
Verve, 1959. Used
CD...$9.99
Diz breaks past his bop playing, takes a bit of a turn towards swing-based material, and also hits this nice rolling groove that gives a bit of a peek at the way he'd sound in the 60's, when he had Lalo Schifrin on piano, and more of a Latin sound. He's backed here by Junior Mance on piano, Les ... CD

His Majesty King Funk/Up With Donald Byrd
Verve, 1964/1965. Used
CD...$18.99
2 of the grooviest Verve 60s jazz funk sessions on one CD! Grant Green's His Majesty King Funk is a tight quintet session with Larry Young on organ and Harold Vick on tenor, and it grooves with a tightness that matches Green's best Blue Note sessions. The album is reissued here with the tracks in ... CD

Jazz Giants '58 (Japanese pressing)
Verve (Japan), 1958. Used
CD...$14.99
An all-star session put together by Verve in 1958 – one that features a septet of some of the label's biggest giants in jazz at the time! The format here is a bit open-ended – almost like some of the earlier JATP sessions on Verve – with lots of room for personal interaction ... CD