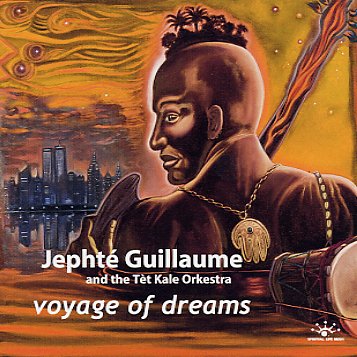 A wonderfully ambitious project from Jephte Guillaume – a stunning blend of upbeat tracks steeped in Latin and African influences – grooving together with a globally conscious approach that's completely sublime! The album blows away any expectations we had for it – stretching forward in a sound that's as evocative as its title, old and new influences working together as one to forge a style that makes Guillaume one of the most exciting New York talents of the 21st century. A real masterpiece – well worth the double CD package it's taken to house all the tracks – and the kind of set that will have you discovering new delights again and again! Titles include "Fredo's Jazzy Fingers", "Lakou A", "Ibo Lele", "Lot Bo Dlo", "Al Di Yo", "Kanpe", "Tribute To Ernie", "Kote Moun Yo", and "Pouki".  © 1996-2020, Dusty Groove, Inc.
(Out of print, French digipak pressing. Actual cover has a blue background. Case has light wear.)

Caribbean Disco Boogie Sounds – Rare & Obscure Gems From The Caribbean Territories 1977 to 1982
Favorite (France), Late 70s/Early 80s. Used
CD...$18.99
A killer collection of funky soul from the Caribbean – not tracks that have a typical island sort of sound, with roots in calypso, soca, or reggae – and instead just he kind of key cuts that match the best underground work on the New York scene! Keep in mind that lots of American disco ... CD