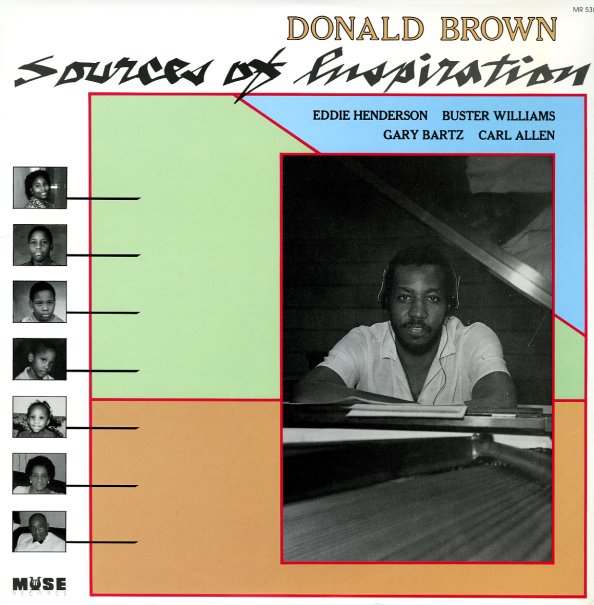 Sources Of Inspiration (with bonus tracks)

An inspiring set from pianist Donald Brown– working here in a group that features some especially nice work from Gary Bartz and Eddie Henderson! Bartz plays soprano and alto sax, Henderson trumpet and flugelhorn – and both players fill the album with soulful colors and well-spun solos – stretching out majestically to give the set a great deal of power, and really match Brown's imaginative compositions. Donald's piano lines are great too, and rhythmic support is from Buster Williams on bass and Carl Allen on drums – the last two points in a star of a quintet for the session. Titles include "Capteown Ambush", "Overtaken By A Moment", "New York", "Phineas", "The Human Impersonator",and "Do We Have To Say Goodbye". CD includes 2 bonus tracks; "Embraceable You" & "Insane Asylum".  © 1996-2022, Dusty Groove, Inc.
(Out of print and still sealed.)

Crunchin'
Muse, 1993. Used
CD...$9.99
Very vibrant work from trumpeter Wallace Roney – the sort of record that seems to burst out strongly even on the ballads – which is no surprise, given Wallace's tone at the time! The group here is a strong one for Roney – Antonio Hart on alto, Geri Allen on piano, Ron Carter on ... CD

Bird Lives
Muse, 1973. Used
CD...$11.99
Charlie Parker may live again in the title of this set – but given the strengths of the group, the album would be great even without a reference to Bird! The setting's a bop one, as you'd guess – but there's also a lot more going on here too, given that some of the tunes are longer and ... CD

Imagination
Muse/Savoy, 1988. Used
CD...$6.99
A late date for Woody Shaw, but a great one too – a bit more straightforward than some of his more righteous albums of the 70s, but still proof that Shaw is easily one of the greatest trumpeters of his generation! The album's got a laidback sort of feel, and features a fair bit of familiar ... CD

Solid
Muse/Savoy, 1986. Used
CD...$14.99
One of Woody's last albums – a back to basics set, recorded with a group that include Kenny Garret on alto sax, Kenny Barron on piano, and guest guitar work on one track by Peter Leitch. The approach is straight modal hardbop – in the spirit of Woody's first recordings for Muse – ... CD

Whip Appeal
Muse, 1990. Used
CD...$9.99
A kinky cover, but a great little record – as the Hammond giant is joined by Johnny Coles on flugelhorn, Houston Person on tenor, and Jeffrey Newell on alto and soprano! CD

Solid
Muse, 1986. Used
CD...$9.99
One of Woody's last albums – a back to basics set, recorded with a group that include Kenny Garret on alto sax, Kenny Barron on piano, and guest guitar work on one track by Peter Leitch. The approach is straight modal hardbop – in the spirit of Woody's first recordings for Muse – ... CD

Seth Air
Muse, 1991. Used
CD...$6.99 12.99
One of Wallace Roney's best sessions from the time – an album with a great sense of balance and fullness, and a tremendous tribute to Roney's strength as a leader on Muse Records! The album features equally great contributions from Antoine Roney on tenor – a player who balances out ... CD