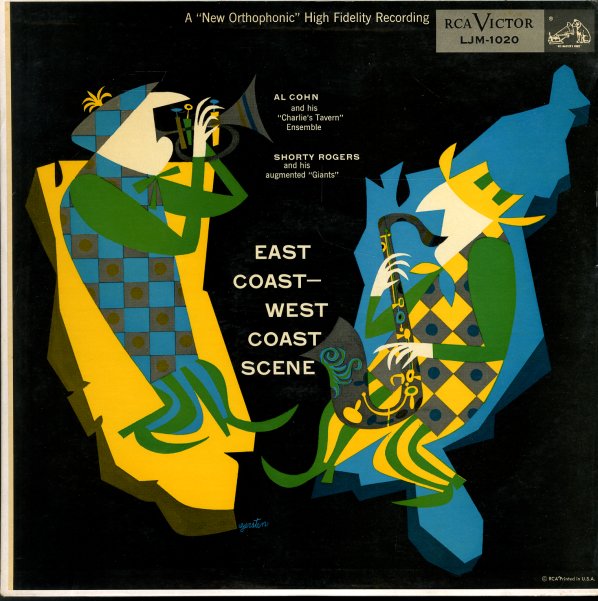 A classic session in the tried and true marketing style of "East Coast vs West Coast" jazz, with one side of tracks by a group led by Al Cohn, and featuring Gene Quill, Hal McKusick, and Joe Newman. The other side's got Shorty Rogers representin' on the West Coast, with Jimmy Giuffre, Zoot Sims, Bud Shank, and Shelly Manne. The album's a nice batch of tracks, in the tightly arranged style that characterizes many of these mid-50's RCA jazz sessions. However, since Cohn's measured playing could never really be taken for New York Hot, and since his longtime partner Zoot Sims is part of Rogers' West Coast group, it's hard to say that these sides are really any sort of true battle between the coasts. Instead, though, the tracks are nice and long, with more room for solos than usual, and titles that include "Loki", "Cool Sunshine", and "Inside Out".  © 1996-2021, Dusty Groove, Inc.
(Mono pressing with deep groove. Cover has a split top seam, light wear, and some aging.)

After The Party's Over
RCA, 1958. Very Good+
LP...$14.99
An obscure 50s session from bassist Aaron Bell – one of the player's few dates as a leader, cut at a time when he was working in Duke Ellington's group of the decade! As with some of Duke's other bassists, Bell's got a strongly pronounced tone – one that came through great in big group ... LP, Vinyl record album