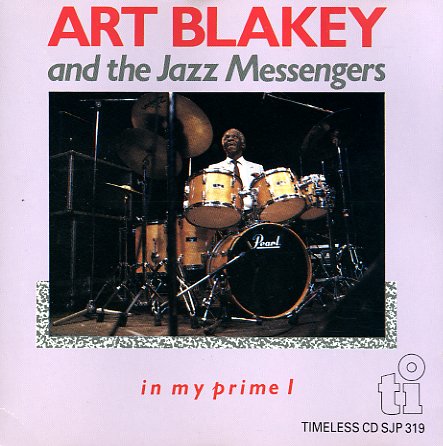 You gotta love the confidence in Blakey's title for this one – because even in the late 70s, over 20 years since starting the Jazz Messengers, he was still very much in his prime! The album has him working with a wonderful group that includes Bobby Watson, Curtis Fuller, David Schnitter, and James Williams – plus percussionist Ray Mantilla, added in on a few tracks to give the set a slightly fuller sound. Tracks are long, dynamic, and gorgeous – really stepping out with the warmth and imagination that Blakey never let die during his career – but which seemed to be buring as brightly during this stretch as it was during the few really noteworthy points of earlier years. The set features a wonderful early reading of Watson's "To See Her Face", plus other tracks that include "Hawkman", "People Who Laugh", "Jodie", and "1978". CD also features 2 bonus tracks from the album Reflection In Blue.  © 1996-2022, Dusty Groove, Inc.
(Out of print original pressing.)

California Message
Timeless (Netherlands), 1980. Used
CD...$16.99
Benny's California Message is loud and clear on this great session originally produced for the Japanese market – an album that has him working with old bandmate Curtis Fuller, as well as younger California soul jazz players, like Thurman Green on trombone, Oscar Brashear on trumpet, and Bill ... CD