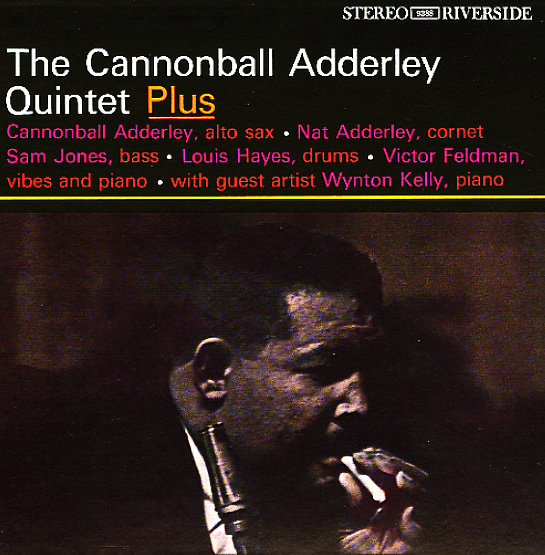 An all-star set from Cannonball Adderley – a hip standout in his pre-Capitol years for Riverside! The "plus" in the title is pianist Wynton Kelly – who works with the group wonderfully on 4 of the album's 6 tracks – bringing in a slightly different feel on the keys than you might get from some of Cannon's other albums – slightly lyrical at points, in a really great way. Rhythm is from the rock-solid team of Sam Jones on bass and Louis Hayes on drums – and of course Nat Adderley's also in the group on cornet, and Victor Feldman rounds out the ensemble on vibes, but also plays piano on the tracks that don't feature Kelly. There's a strong undercurrent of Adderley's Riverside soul jazz vibe on the set – and titles include "Arriving Soon", "New Delhi", "Winetone", "Well You Needn't", "Star Eyes", and "Lisa".  © 1996-2020, Dusty Groove, Inc.
(Out of print.)

Jones Boys
Period/OJC, 1957. Used
CD...$9.99
Kind of a gimmicky session, but a great one nonetheless! It was Leonard Feather who first thought of rounding up all the "Jones" in jazz he could find, bringing them together for this unique date for the Period label – but fortunately, the quality of the work and strength of the ... CD