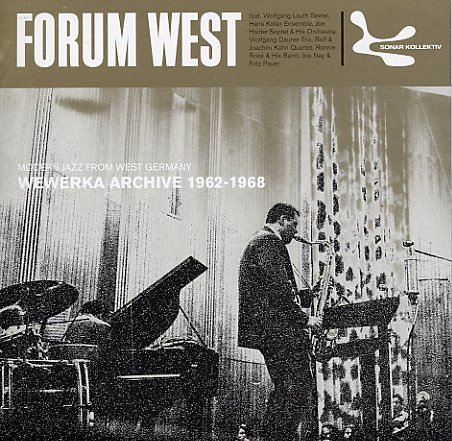 If there's a better compilation of groovy, groovy West German jazz from the early-to-mid 60s than this amazing set from Sonar Kollectiv – we'd be shocked to hear it! Forum West features an amazing selection of some of the best 60s icons of the German and European scenes – including Hans Koller, Wolfgang Dauner, Rolf & Joachim Kuhn, Joe Nay & Fritz Pauer and many more! The modern jazz scene of the time was absolutely ripe with some of the most open and creative grooves jazz had seen at the time, thanks to the floodgates being ripped open by Mingus, Byrd, Cherry and others in the avant garde – and the artists on this set inject that sweetly open and groovy European aesthetic – full of chiming keys and vibes, flute, and other airy elements that make the overall sound so magical! Amazing, amazing stuff – some of the greatest hip European jazz you could ever hope to hear from the era! Tracks include "Intrata" by the Wolfgang Lauth Sextet, "Mingus Privat" by Hans Koller Ensemble, "Freefall" by Wolfgang Dauner Trio, "Last Of The Wine" by Ronnie Ross & His Band, "Red Roof" by Fritz Pauer Trio, "Eternal Oil Lamp" by the Joe Haider Septet, "Arabia Rock" by Rolf & Joachim Kuhn Quartet and much more!  © 1996-2021, Dusty Groove, Inc.
(Out of print.)