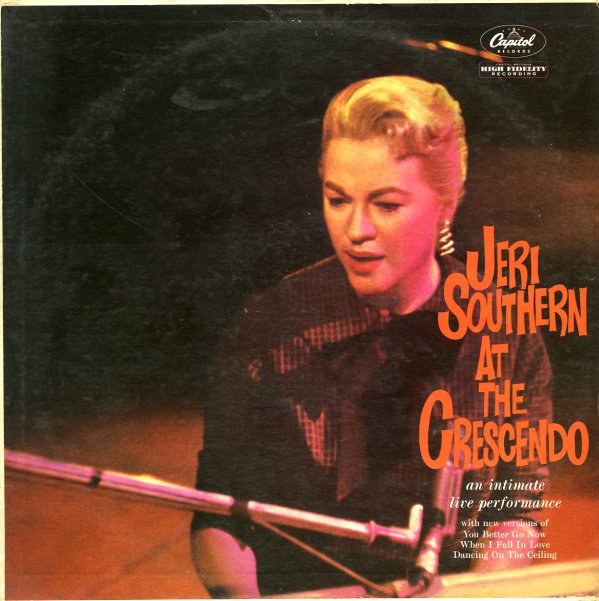 Great proof that Jeri Southern's a hell of a jazz singer in just the right setting – and this album's just the right setting! The set features Jeri live at the Crescendo – working with small group backing at the famous LA nite spot – including piano from Dick Hazard, who also arranges the combo on most tracks too – balancing core piano trio styles with some light cello that really sounds wonderful – used in slight ways to echo larger strings, but still leaving the rest of the group to move in gentle torch jazz modes. Jeri plays piano herself on a few tracks – and titles include "Remind Me", "Blame It On My Youth", "You Better Go Now", "I'm Just A Woman", "I Thought Of You Last Night", "I Get A Kick Out Of You", and "Dancing On The Ceiling".  © 1996-2023, Dusty Groove, Inc.

Dakota Staton Sings Ballads & The Blues
Capitol, Late 50s. Very Good+
LP...$4.99
A lesser-remembered Capitol set from Dakota Staton, but a great one too – a record that has Dakota singing ballads and blues, both of which she does pretty darn well! On some tracks, Sid Feller handles the backings, often with a gentle mix of strings – while other numbers have a bit ... LP, Vinyl record album

Sweet Baby Blues
Concord, 1984. Very Good
LP...$0.99
A sweetly stepping session of bluesy jazz vocals from Jeannie Cheatham – outwardly a trad-oriented record, but done here with some nice light west coast touches that really capture the best of the Concord groove of the early 80s. There's a gentle swing to the tracks that reminds us of some ... LP, Vinyl record album