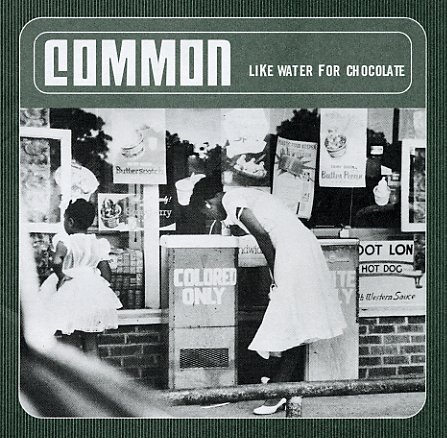 A huge creative leap forward for Common! Com had been slowly moving from a Chicago street poet role into a more universally conscious hip hop soul from record to record to this point, but Like Water For Chocolate is the one that really catapulted him deep into that realm – especially given the excellent, mood setting production of Jay Dee/J Dilla and The Soulquarians. For a little while there, we missed the rawer Relativity era vibe, and we didn't fall as head over heels for Like Water For Chocolate as the world at large did, but in hindsight, maybe we just weren't ready for it – it's easily amongst the best hip hop albums of the period. Titles include "The 6th Sense", "Cold Blooded", "Dooinit", "Geto Heaven Part Two" with D'Angelo, "Time Travelin' (A Tribute To Fela)", "Heat", "The Light", "Thelonius", "Payback Is A Grandmother", "Funky For You", "A Film Called (Pimp)", "Nag Champa (Afrodisiac For The World)", "The Questions" and "A Song For Assata".  © 1996-2021, Dusty Groove, Inc.

Bulletproof Wallets
Epic, 2001. Used
CD...$4.99
Ghostface's follow up to Supreme Clientele – a tough predecessor to live up, no doubt about that – but Bulletproof Wallets is still a cut or 10 above some of the Wu work of the later 90s and early 00s! The single "Ghost Showers" is a great track, and "Never Be The Same ... CD

Ironman
Epic/Razor Sharp, 1996. Used
CD...$4.99
One of the instant classic Wu Tang solo projects – Ghostface Killah's essential, early peak Ironman – and a a record that stands strongly among the best hip hop albums of the its era! Produced by The RZA at a point in which it seemed there was little he could do wrong. An absolute ... CD