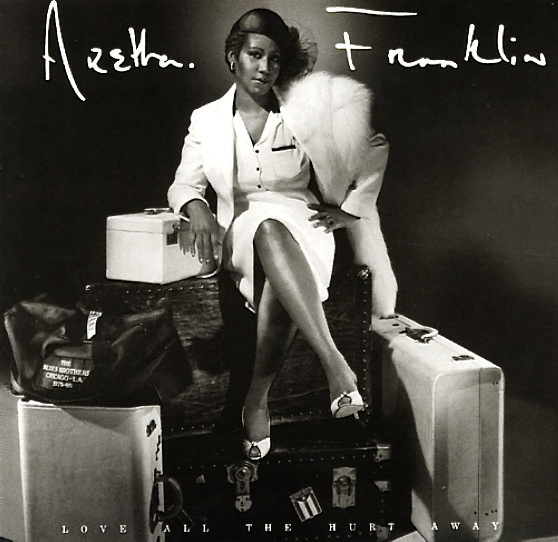 Also available
Aretha Franklin — Love All The Hurt Away (with bonus tracks) ... CD 12.99
An early 80s gem from Aretha Franklin – one of the best of her years at Arista Records, thanks to solid help in the studio from the mighty Arif Mardin! Mardin's in perfect form here – the same blend of older soul and jazzier, more sophisticated styles that he was also bringing to Chaka Khan at the time – although Franklin's arguably more deserving of his talents, given her long relationship with the producer! There's a full, mature feel here – one that really gets Aretha back in gear as a singer, and shows off her talents to a new generation in new ways – yet all without trying too hard for a crossover hit. Tunes include a few originals by Franklin, and titles include "Kind Of Man", "Whole Lot Of Me", "Love All The Hurt Away", "You Can't Always Get What You Want", "It's My Turn", "There's A Star For Everyone", and "Hold On I'm Coming".  © 1996-2023, Dusty Groove, Inc.
(Still in the shrink with hype sticker. Includes the printed inner sleeve. Cover has a cutout notch.)

Reflections
Arista, 1981. Near Mint-
LP...$29.99
A great little album that's often overshadowed by its hit – the 15 minute "B-Movie", which was sort of an overly-wrought protest piece about how the election of Ronald Reagan in 1980 was going to turn America into a bad b-movie. Not that that track's bad – although its ... LP, Vinyl record album

Greatest – Original Soundtrack
Arista, 1977. Very Good+
LP...$8.99
A great little album, put together to accompany one of Muhammad Ali's finest moments on the big screen – in a blend of music that's way deeper than the usual sounds you'd hear ringside! Michael Masser helmed the set – produced and wrote most of the material – but also with key ... LP, Vinyl record album

No Night So Long
Arista, 1980. Very Good+
LP...$1.99
A key album in Dionne Warwick's career revival at Arista Records – a set that's filled with the kind of fuller sounds and maturing modes that worked quite well for her shifts in styles over the years! Warwick's a bit less fragile than in the Scepter years, but also not trying as hard to be ... LP, Vinyl record album