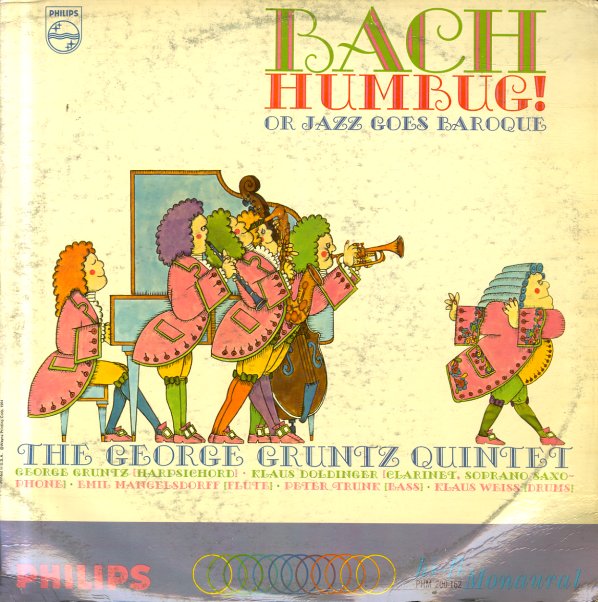 A very groovy set of tunes from the hip European scene of the 60s – and one of the best blends of jazz and classical music we can think of! Sure, the tunes are from Corelli, Handel, Pachelbel, and other baroque composers – but they're taken to hip jazzy territory here in the hands of pianist George Gruntz – who plays some mighty cool electric harpsichord on the set! The sound's more like a 60s soundtrack swing than any staid sort of longhair classics – thanks in part to great work from Klaus Doldinger on soprano sax, and Emil Mangelsdorff on flute – plus swinging rhythms from the team of Peter Trunk on bass and Klaus Weiss on drums. The horns bring in a sense of depth and soul to the record that's missing from other dates of this nature – especially trio sets, like those of Jacques Loussier – and titles include "Corrente", "Pavana", "Gavotte En Rondeau", "Le Croc En Jambe", and "Musette En Rondeau".  © 1996-2020, Dusty Groove, Inc.
(Stereo pressing with deep groove.)

Jazz Goes Baroque
Philips (Germany), Mid 60s. Very Good+
LP...$11.99
A very groovy set of tunes from the hip European scene of the 60s – and one of the best blends of jazz and classical music we can think of! Sure, the tunes are from Corelli, Handel, Pachelbel, and other baroque composers – but they're taken to hip jazzy territory here in the hands of ... LP, Vinyl record album

Lifeline
Philips (UK), 1973. Near Mint-
LP...$6.99
Pretty great jazzy work from Johnny Dankworth – one of the hipper Brit bandleaders of the 60s, working here in a sweet 70s mode that reminds us of some of the larger MPS projects of the same time. The tracks have a bit of an electric glow in the basswork and production, but the main focus is ... LP, Vinyl record album

Wright Groove
Philips (UK), 1962. Very Good
LP...$24.99
A very unusual album from bassist Eugene Wright – one of his few dates as a leader, despite famous work in the Dave Brubeck quartet! The set is great – with very strong work from Wright, who's maybe more soulful than usual – and recording here in New Zealand with a hip quartet ... LP, Vinyl record album