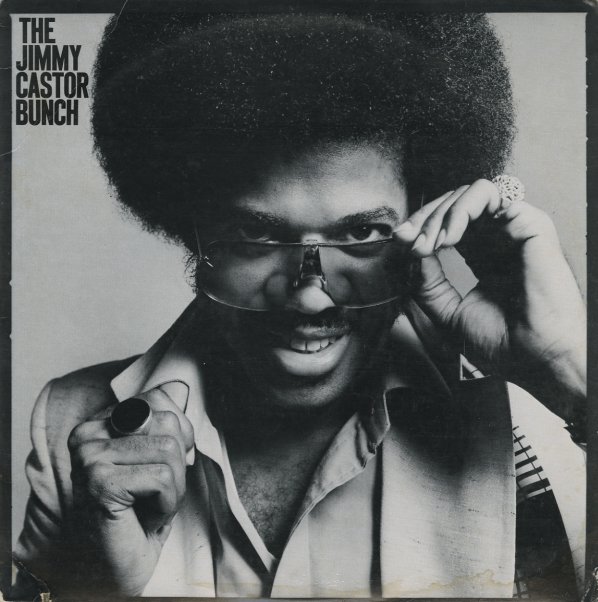 Not one of Jimmy's strongest – kind of a batch of smooth tunes going for that bass-heavy early 80s approach to funk. Jimmy, as usual, plays a host of instruments and sings lead vocals – and he's got backup vocals on the album by The Chantels, who almost do a kind of Parlet kind of thing on the faster tracks. Titles include "Psych Out", "Goodbye", "I Just Wanna Stop", "Party People", and "Don't Do That".  © 1996-2022, Dusty Groove, Inc.
(Cover has a promo stamp.)

Dimension III
RCA, 1973. Near Mint- Gatefold
LP...$13.99
Three-dimensional magic from the great Jimmy Castor – an artist who'd already conquered the worlds of sweet soul, heavy funk, and Latin by the time of this release! Jimmy draws on all his rich background in the soul underground, and also seems to move with a new sort of sophistication, too ... LP, Vinyl record album

We Are Family
Cotillion, 1979. Very Good+
LP...$19.99
Possibly the greatest moment ever from Sister Sledge – a set that has the Philly quartet teaming with the Chic team of Nile Rodgers and Bernard Edwards! Rodgers' guitar brings in a hell of a groove to the record – that choppy, skittish sound that made Chic such a favorite at the time ... LP, Vinyl record album

Together
Cotillion, 1977. Near Mint-
LP...$11.99
The second album from Sister Sledge – recorded in Munich with the team of Michael Kunze & Sylvester Levay, the guys behind the big disco hits by Silver Convention – with that tight, bright and bouncing soul groove and sultry group vocals from the sisters! The approach works very ... LP, Vinyl record album

Baby Brother
Cotillion, 1981. Near Mint-
LP...$14.99
A great little album from Baby Brother – a group who share a name with a famous funky track by War, but who come on here with a completely different sound altogether! The group are a funk ensemble at the core, but they have this really special way of weaving their instruments together – ... LP, Vinyl record album

Heavy Love
Cotillion, 1979. Near Mint-
LP...$4.99
Detroit soul legend Dee Edwards gets a great chance at a comeback here – working in some of the more uptempo, clubby styles used by other artists on her scene at the time! Arrangements and production are by Floyd Jones, who does a nice job of mixing the modern disco touches of the backings ... LP, Vinyl record album

Hold On (To Your Dreams)
Cotillion, 1980. Very Good
LP...$4.99
Great smooth soul from Wee Gee – a wonderful little record from the dawn of the 80s! The album's a great one, thanks largely to Vernon Bullock, who wrote, arranged, and produced with that uptempo modern style that he brought to his best work of the 70s. The soaring title track is a 10+ ... LP, Vinyl record album

Love Somebody Today
Cotillion, 1980. Sealed
LP...$6.99
A crisp, but funky set from Sister Sledge – produced by Nile Rodgers and Bernard Edwards of Chic, who also lead the studio band – tight funky soul grooves all the way! After the dizzying heights of We Are Family, there might have been nowhere to go but down commercially, but Love ... LP, Vinyl record album