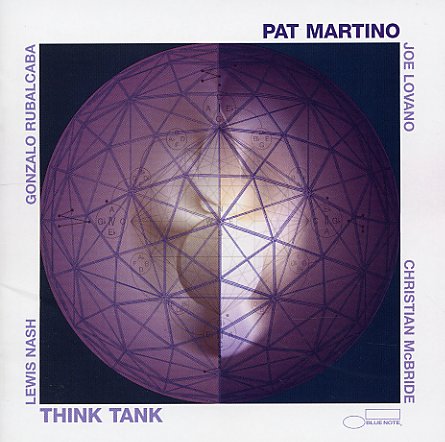 Angular and modern work from guitarist Pat Martino – working here in a field of dark tones and colors that recalls some of his best moments of the 70s! The album's got Pat playing with a quintet that includes Joe Lovano, Gonzalo Rubacalba, Christian McBride, and Lewis Nash – and the tracks effortlessly bend around complicated rhythms while still managing a nice degree of swing. Titles include "Africa", "Dozen Down", "Think Tank", "The Phineas Trane", "Earthlings", "Before You Ask", and "Quatessence".  © 1996-2020, Dusty Groove, Inc.
(Out of print.)

Formidable
High Note, 2017. Used
CD...$12.99
Fantastic work from guitarist Pat Martino – a player who never seems to have lost his groove, and who might well be sounding even better in the past decade than a few years before! This album's got Pat in core trio formation – working with the organ of Pat Bianchi, whose sound ... CD

El Hombre
Prestige/OJC, 1967. Used
CD...$5.99 (CD...$24.99)
The first album that guitarist Pat Martino ever cut as a leader – and an excellent mix of styles that links his soul jazz roots with his later, trippier recordings! The group here is a sextet, and it features organist Trudy Pitts (who was Martino's boss at the time), plus flute, drums, and ... CD

El Hombre (Japanese paper sleeve edition)
Prestige (Japan), 1967. Used
CD...$24.99 (CD...$5.99)
The first album that guitarist Pat Martino ever cut as a leader – and an excellent mix of styles that links his soul jazz roots with his later, trippier recordings! The group here is a sextet, and it features organist Trudy Pitts (who was Martino's boss at the time), plus flute, drums, and ... CD

Mission Accomplished (Interchange/Nightwings)
Muse/32 Jazz, Mid 90s. Used 2 CDs
CD...$6.99
A two CD set – one that brings together two Muse Records sessions from Pat Martino! First up is Interchange – later work from Pat Martino, but a set that shows that the guitarist has lost none of his fire over the years! The set's done with a relatively freewheeling sound – not ... CD