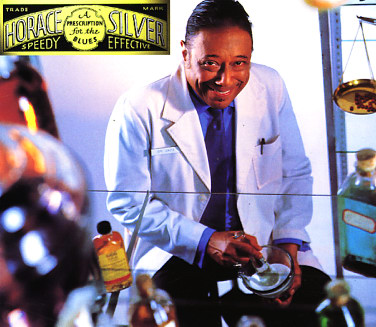 Prescription For The Blues

A hokey cover, a hokey title, but a surprisingly great little record – Horace Silver's first quintet session in many many years, and a record that comes across with a really lyrical sense of soul! And sure, the album's not one of his classics for Blue Note, but the format is quite the same – tenor, trumpet, piano, bass, and drums – all woven into a warm tapestry of groove, based around some wonderful original compositions from Horace himself! The whole thing is surprisingly wonderful – especially for the date and the cover – and we'll be honest in saying that we actually passed this one up when it came out back in the 90s (effete jazz snobs we are), but we're really digging it a lot these days, and are glad we finally gave it a chance. Players include Michael Brecker on tenor and Randy Brecker on trumpet – both following Horace's lead strongly – plus Ron Carter on bass and Louis Hayes on drums. Tracks include "Walk On", "Sunrise In Malibu", "You Gotta Shake That Thing", "Whenever Lester Plays The Blues", "Free At Last", and "Brother John & Brother Gene".  © 1996-2022, Dusty Groove, Inc.
(Out of print. Back cover has a sticker with the name of the previous owner.)