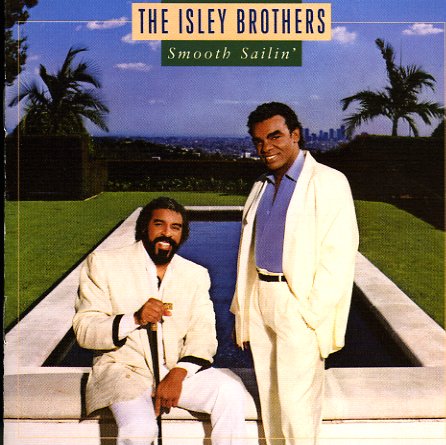 Classic 80s work from the Isley Brothers – a set that has the duo of Ronald and Rudolph getting some great help in the studio from Angela Winbush! Angela helped produce the record, and she also wrote many of the songs – and she plays keyboards on the set too, giving the tracks the upbeat, bouncy style you might find in her own recordings of the time. As usual for the duo, the vocals are wonderful – every bit as great as that classic Isley sound first forged in the 70s – warm and magical here, even wrapped around some heavier 80s rhythms. Titles include "Somebody I Used To Know", "I Wish", "Smooth Sailin Tonight", "Come My Way", "Everything Is Alright", "Dish It Out", and "Send A Message".  © 1996-2022, Dusty Groove, Inc.
(Sealed 80s pressing! Cover has a cutout notch.)

Harvest For The World
T Neck, 1976. Near Mint-
LP...$9.99
Fantastic Isleys from the mid-70s! The record has the group dropping their heavy funk style (which was sounding a bit tired by this point), and picking up a strident soul groove that buoyed their tracks with a spiritual sound that reminds us of some of the best moments from the Brother Brother ... LP, Vinyl record album

Purple Rain
Warner, 1984. Very Good
LP...$119.99 (CD...$1.99)
One of the greatest crossover albums of the 80s – and the record that catapulted Prince very firmly into the mainstream! There's a tightness here that surpasses even that of Prince's early classics for Warner Brothers – an unabashed love of a pop hook that makes for some incredibly ... LP, Vinyl record album