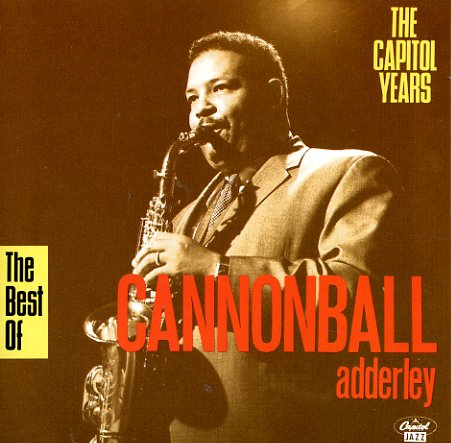 Cannonball Adderley & His Quintet En Concert
Europe 1, 1969. Used
CD...$4.99
A hip little live set from Cannonball – recorded at the end of the funky 60s, in Paris, with Joe Zawinul on keyboards, and in the same long electric tradition as his famous Country Preacher album! The tracks include some of the gems from the Capitol years – stretched out and served up ... CD

Julian Cannonball Adderley
EmArcy/Verve, 1955. Used
CD...$9.99 (LP...$11.99)
Very early work from Cannonball Adderley – recorded way before the funky years, when he was a hard-wailing soulful soloist with a lot of bop in his style! Cannon's paired here with brother Nat, a good companion even at this early stage – and the two of them solo in front of a large ... CD

Somethin' Else (RVG Remaster Edition)
Blue Note, 1958. Used
CD...$4.99 (LP...$58.99)
A landmark album – even if it was the only session that Cannonball Adderley ever cut for Blue Note! The album was recorded at a time when Adderley was working with Miles Davis – and as such, the session features a group that includes Miles, blowing trumpet in a cool tone that's a ... CD

Mercy, Mercy, Mercy!
Capitol, 1966. Used
CD...$6.99
If the 60's ever had a "hit" jazz record, it was probably this one! The album's a sparkling live session featuring the trademark soul jazz sounds of the Cannonball Adderley group with Joe Zawinul on acoustic and electric piano, and brother Nat Adderley on cornet. The tracks have a long ... CD

Cannonball Takes Charge
Riverside/Capitol, 1959. Used
CD...$4.99
A hardbop classic from Cannonball Adderley – and one of his harder to find albums from the Riverside days! The set has Cannon playing without his usual group, in the context of an all-star batch of players that includes Wynton Kelly, Paul Chambers, and Jimmy Cobb – who he worked with ... CD

Cannonball & Coltrane (aka Cannonball In Chicago)
Limelight/EmArcy, 1959. Used
CD...$4.99
A great session from 1959 – one that features John Coltrane playing with the Adderley group, recorded in Chicago when they were stopping through the city with Miles Davis' combo at the time! In fact, since the rhythm section includes Wynton Kelly, Paul Chambers, and Jimmy Cobb – and ... CD

Country Preacher – Live At Operation Breadbasket
Capitol, 1969. Used
CD...$6.99 (LP...$11.99)
A totally great set by Cannonball Adderley – one of his funkiest albums ever, recorded live at Operation Breadbasket under the supervision of Jesse Jackson, and a session in which the band is cooking a lot more than on some of their other albums from the time! The set grooves hard with some ... CD

Stan Kenton Conducts The Jazz Compositions of Dee Barton
Capitol, 1967. Used
CD...$3.99
One of the hippest Stan Kenton albums of the 60s – a set of original compositions by Dee Barton – Stan's drummer at the time, and a composer to rival the great ones who contributed to the Kenton group of the 40s and 50s! Barton's work here is totally great – modern, but never too ... CD