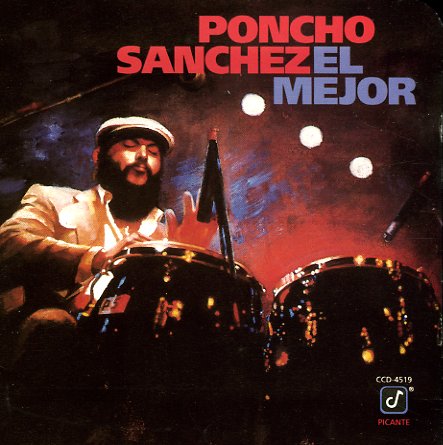 Major grooves from Poncho Sanchez – just the kind of cooking set that makes just about every one of his dates for Concord well worth searching out! The sound here is nice and traditional – at least in the Latin jazz mode – heavy percussion from Poncho, topped by an array of great horns from players who include Andy Martin on trombone, Sal Cracchiolo on trumpet, and both Tom Casey and Justo Almario on alto, tenor, and flute! David Torres plays piano and directs the group,a nd titles include "Suenos", "Lip Smacker", "Monk", "Angel", "Suave Cha", "Dichoso", "Typhoon", and "Just A Few".  © 1996-2022, Dusty Groove, Inc.
(Out of print.)

Psychedelic Blues
Concord, 2009. Used
CD...$7.99
Latin jazz from Poncho Sanchez – not only Latin percussion flavored Psychedelic Blues – but vibrant bits of salsa, both lean and heated Latin jazz, and swirling percussive grooves galore! As always, Pancho's percussion is fantastic, and there's a jazziness on this set that wasn't in ... CD

Latin Soul
Concord, 1999. Used
CD...$5.99
Poncho's still cooking nice and hard on congas – and he's got a tight band backing him up on this feisty session of heavy Latin grooves. The album's a nice throwback to the glory days of Latin soul, and it features an Eddie Harris medley of "Cold Duck" and "Listen Here", ... CD

Live!
Concord, 2003. Used
CD...$4.99 9.99
A live performance with two generations of Escovedos – including Sheila E on drums and vocals, Juan Escovedo on congas, and Peter Michael Escovedo on guiro! CD