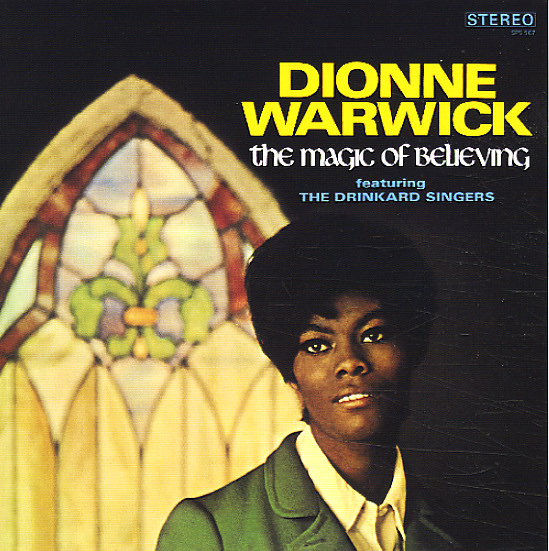 Quite an unusual album for Dionne Warwick – a late 60s effort that has her returning to her gospel roots, and singing with backing from The Drinkard Sisters – a group originally founded by Dionne's mother, and which featured a young Cissy Houston! The sound here isn't as strictly gospel as you might expect – and in a way, it's almost an exploration of some of the more spiritual themes that echoed on some of Dionne's earlier hits written by Burt Bacharach – those slow-building and soulful moments that were themselves a reflection of Warwick's earlier roots. The arrangements aren't credited here, but they're also not as "churchy" as you might expect – and still have some of the sophistication of Bacharach backings from previous albums. Titles include "Somebody Bigger Than You & I", "The Magic Of Believing", "Steal Away", "Grace", and "In The Garden".  © 1996-2021, Dusty Groove, Inc.
(Stereo pressing with silver text. Cover has a cutout hole.)

Dionne Warwick In Paris
Scepter, 1966. Near Mint-
LP...$4.99
A unique concert album from Dionne Warwick – proof that her talents weren't always restricted to Burt Bacharach arrangements in the studio! The setting is the classy Olympia Theater in Paris, and the style is a bit more open than on Dionne's studio albums – with less material by ... LP, Vinyl record album

Shirelles Greatest Hits Vol 2
Scepter, Mid 60s. Near Mint-
LP...$7.99
A nice collection of tracks from this classic girl group, and one that has a lot of lesser-known material that's pretty darn nice! Includes their very groovy "It's A Mad, Mad, Mad World" – plus the tracks "Boys", "I Met Him On A Sunday", "Don't Go Home (My ... LP, Vinyl record album