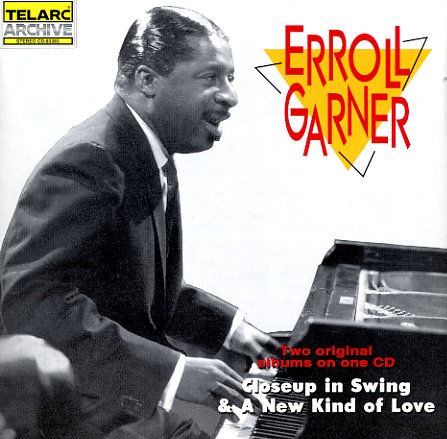 Close Up In Swing/New Kind Of Love

Two Erroll Garner albums – back to back on a single CD! First up is the obscure ABC album Close Up In Swing – Erroll Garner at the start of the 60s – but still sounding wonderfully unique, and coming across with a timeless vibe that makes the record every bit as great as his classics from the 50s! The format is simple – just Garner on piano, with Eddie Calhoun on bass and Kelly Martin on drums – but the sound is sublime, and in that special Garner-like approach that nobody else could match – very rhythmic, with a gritty pulse at the core – yet topped with these explosive lines on the keys that all make complete sense – not showoffy pyrotechnics, but sublime lyrical lines that never fail to blow us away. Titles include "All Of Me", "No More Shadows", "You Do Something To Me", "The Best Things In Life Are Free", and "El Papa Grande" – a nice number with a bit of a Latin pulse! New Kind Of Love is a really unusual album from piano giant Erroll Garner – a jazz album at the core, but one that was also used as the soundtrack for an obscure Paul Newman film of the 60s! We always love Erroll Garner in a fuller setting – something that's not always easy to find on record – and this album features his piano in the lead, over the top of some great backings from Leith Stevens – known best for his jazz soundtracks of the 50s! Stevens' provides a light bank of strings and woodwinds as support for Garner – and some of the best tunes here have a slight bossa undercurrent – quite sparkling, and very nice overall. Titles include "The Tease", "Mimi", "Paris Mist", "Fashion Interlude", "Louise", and "Theme From A New Kind Of Love".  © 1996-2022, Dusty Groove, Inc.

Side By Side
Telarc, 1994. Used
CD...$4.99
Itzhak Perlman on violin, Oscar Peterson on piano, Herb Ellis on guitar, Ray Brown on bass, and Grady Tate on drums. CD