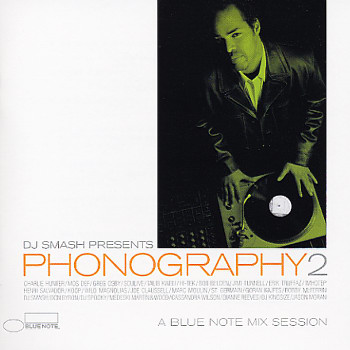 An expansive exploration into the future of funky jazz – put together by DJ Smash, and even better than the first volume in the series! The set brings together recent tracks from a variety of Blue Note releases from around the globe – including a few from the ultra-tasty Blue Note France line – and it also includes a few remixes of straight jazz tracks as well. Titles include "Mesquelero" by Goran Kajfes, "Planet Rock" by Jason Moran, "Street Sounds" by Charlie Hunter with Mos Def, "Poetry In Motion" by Greg Osby, "Bridge To Bama (Hi Tek rmx dub)" by Soulive with Talib Kweli, "Kiss (DJ Smash rmx)" by Bob Belden Project with Jimi Tunnell, "Magrouni (Imhotep rmx)" by Erik Truffaz, "Jazz Mediterranee (Koop rmx)" by Henri Salvador, "Battlefield (Joe Claussell rmx)" by Wild Magnolias, "Into the Dark" by Marc Moulin, "Belmondo's Lip (DJ Spooky rmx)" by Don Byron, "Pat & Joe (DJ Smash rmx)" by Bobby Mc Ferrin, "Come Together (DJ Kingsize rmx)" by Bob Beldon Project with Cassandra Wilson & Dianne Reeves, and "Uninvisible (DJ Smash rmx)" by Medeski Martin & Wood.  © 1996-2021, Dusty Groove, Inc.
(Mark through barcode, disc has a promo stamp.)